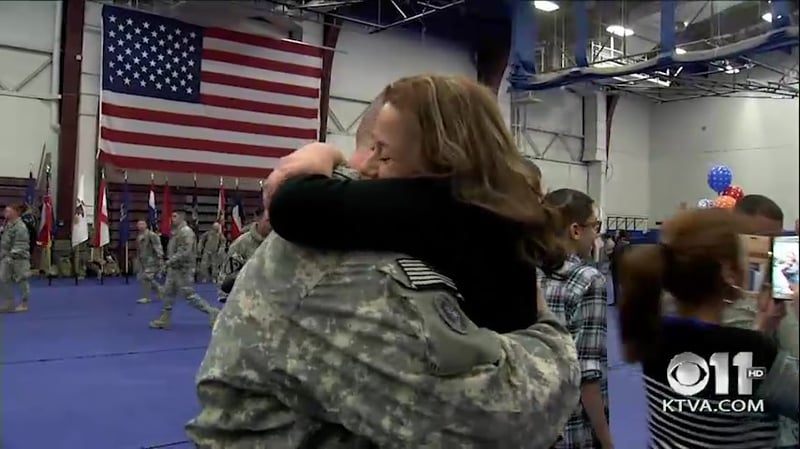 One hundred and twenty Alaskan soldiers returned home Wednesday after nine months overseas. Family and friends gathered at Joint Base Elmendorf-Richardson to welcome the members of the 98th Maintenance Company.

The soldiers were stationed in Kuwait but went on missions all over the region, including to Iraq and Jordan. They maintained equipment for the U.S. Army — everything from vehicles to radios.

Company Commander Cpt. Andrew Rainey said they were ready to return to Alaska.

“Everybody couldn’t wait to get home. Everybody has been waiting and waiting,” Rainey said. “They did a very hard, good job so they deserve it and they feel it. They’re excited.”

It was also a long wait for families like Christie Montjoy and her three kids, who were eagerly awaiting their soldier’s homecoming.

“It’s been insanely crazy, from bouts of ‘it’s never going to get here,’ to ‘oh my gosh, this is the time, we have to get everything done right now,'” Montjoy said. “So yeah, it’s been really crazy. I’m just ready to have him home.”

Their reunion with Sgt. James Montjoy IV was an emotional moment, one for which he says he felt, “pure excitement and joy. No words really.”

The Montjoys said the first thing they’re going to do together is go out for pizza.

Montjoy said it was surreal to think after so long apart, they’d be having dinner as a family once again.

The post Soldiers reunite with families after months apart appeared first on KTVA 11.