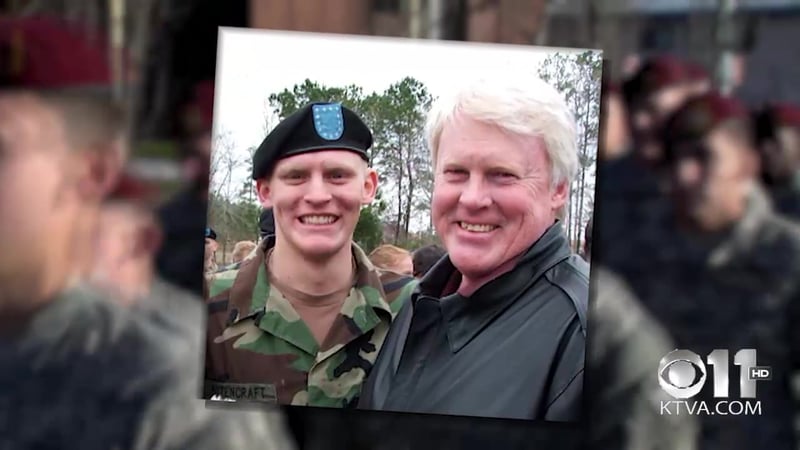 When Tom Wozencraft discovered Anchorage didn’t have a Veterans Day parade, he became determined to make it happen. He was motivated to honor his son, Cpl. Eric Wozencraft, who was killed in a motorcycle accident after serving in Iraq in 2006.

“He told me once before he died, ‘Whenever you honor my band of brothers — the guys that I stand with to defend our freedom — you honor me,’” said Wozencraft.

During the past few months, he gathered support from local service members and veterans to ensure the parade was successful. Even so, he says he would have marched by himself if he had to.

“If it was just me marching down the street with an American flag, that was going to be the Veterans Day parade,” said Wozencraft.

Spectators enjoyed sunny, crisp weather during the parade. But Wozencraft said he wasn’t worried about the early November weather.

“These guys don’t say it’s too cold,” he said. “They go out regardless of what conditions they may be facing.”

Numerous ROTC chapters, active service members and support groups marched in the parade. Gold Star Mothers, an organization dedicated to supporting families who’ve lost loved ones to war, had about a dozen members in the parade.

“I’ve lost my brother, but there are still many more that are getting lost everyday that aren’t getting recognized the way they should be,” said Krista Chriswell.

Parade organizers say they hope to expand the event in future years.

“We will be here next year — and every year that they have one — to represent our group,” said Gale Cottom, another member of Gold Star Mothers.

At the end of the parade, Wozencraft said he felt accomplished.