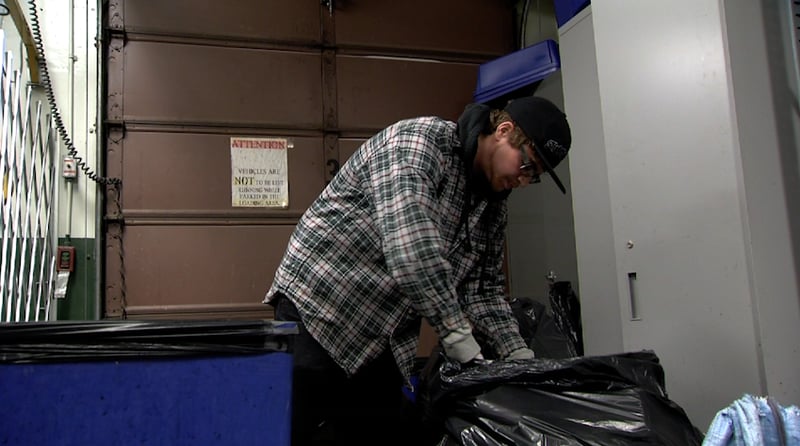 Tucked away in the basement of the University of Alaska Anchorage bookstore is a small space the UAA Recycling Crew uses to sort through plastic bottles, aluminum cans, cardboard, paper and other recyclables.

UAA senior Daniel Harder says yes, the work area is small, but the work is a big deal.

“We pick up recyclables from around campus, so that includes any off-campus buildings, like the Aviation Center and University Center,” said the 23-year-old. “And then we make sure they all get to the right places.”

Being a member of the UAA Recycling Crew is a paid gig, but your heart has to be in it, says Taylor Frese, the recycling program student director.

“From the people that we hire, I get the mindset that they actually enjoy recycling,” said Frese, 22. “And so that’s pulling from the Anchorage community and kind of shows the open mindset of, this is important, it should be done.”

As seniors, Frese and Harder will enter the workforce soon. They say they hope to carry the sustainable practices they have now into whatever job awaits them on the other side of graduation.

A poll by MonsterTRAK.com, a site geared toward students looking for information on entry-level hires, found 92 percent of young professionals would actually be more inclined to work for a company with eco-friendly practices. When Frese graduates in December, she says companies who make recycling a priority will definitely have her attention.

“I’m actually looking into conservation work, for wildlife conservation,” Frese said. “So, most definitely, if they’re not being efficient or sustainable, how can you trust them to be conservative in their mindset of wildlife and wildlife studies?

In the meantime, their work continues on campus. A tour around the student union at UAA is evidence that recycling really does matter to the crew, as recycling bins are strategically placed around the floor map. The mini-mart even keeps a bin tucked behind the counter for quick recycling of unwanted receipts.

At campus events, Freese says she even quizzes her fellow students on how many pounds they think the crew has collected to try and get them involved.

“I get to do something I’m really passionate about,” Frese said. “Something I feel will help the university and, hopefully, the rest of Anchorage too.”

In that same vein, for anyone in Anchorage who’s thinking about going green but isn’t sure how to get started, the Recycling Crew invites them to bring their recyclables to UAA.

“They can always take them here,” Harder said. “Because we’ve got plenty of bins around campus.”

The muni is celebrating Anchorage Recycles Day on Sunday, Nov. 15. To celebrate, the UAA Recycling Crew is holding an event to take unwanted personal electronics.