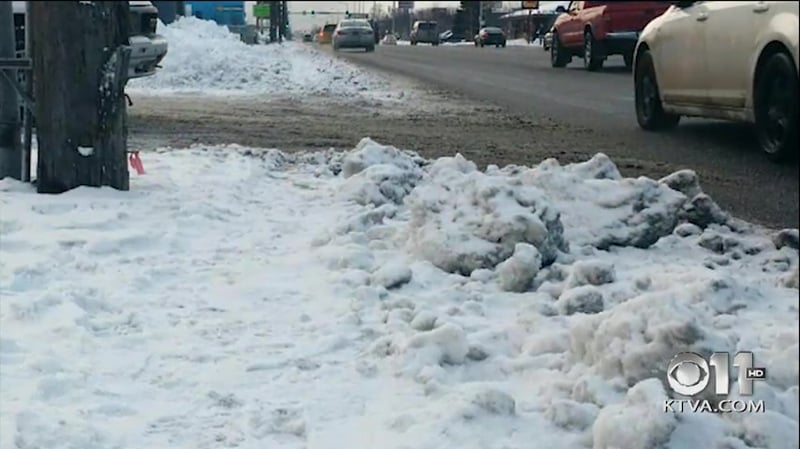 How long should it take to clear Anchorage sidewalks? The municipality says they’ll do it within three days, but the Department of Transportation says it could take them even longer. Some of those who rely on the sidewalks to get around say that’s not good enough.

Streets in Anchorage were plowed and sanded Thursday night, but if you looked left or right, you would see what many pedestrians and cyclists are dealing with on the sidewalks.

“You get pedestrians and bikes creating ruts and holes and then the lightweight sidewalk plows can’t even deal with the sort of alien moonscape of ice that’s left afterwards,” said Ryan Redrummy.

That’s what made him so upset when he witnessed a blind man walking along Northern Lights Boulevard near Arctic Boulevard on Tuesday.

“I see this guy poking around with his stick, a blind man,” he said. “I’m coursing the sidewalks, but at least I can see what I’m dealing with.”

He tweeted a photo saying “Busy 4-lane road with no shoulders and this is what we left him…disgraceful.”

At Northern Lights Boulevard, other pedestrians said they see this happening all too often.

“I believe that we have to comply with the ADA act, and it says that our sidewalks should be passable for everyone,” said Summer Kerr. “They put a lot of money out of the budget this year to making the corners to where the wheelchairs can get up them, but now we’ve got the ice pack that’s creating the same problem.”

It’s the same for walking commuters at Seward Highway and Fireweed Lane.

“I’ve seen a lot of older people walking and one of them I saw fall,” said Breck Craig, adding that he stopped to help the man up.

The muni and the DOT say the roads come first, but Redrummy believes more could be done to make sure every type of commuter gets home safe.

The muni said 72 hours after a snow event, they will have their sidewalks plowed. But the state is responsible for several roads and sidewalks, and said it might take them even longer. When asked if it’s a budget issue, they said “not really,” and that there’s always going to be a greater need that what they have the resources for.