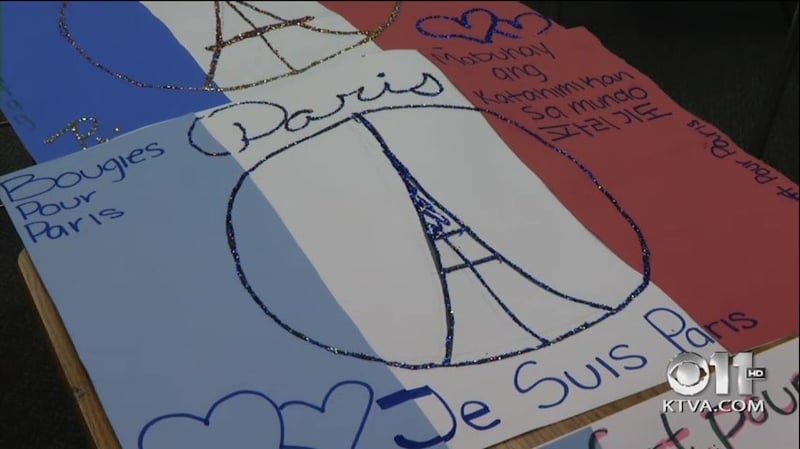 Monday was the first day back in school for Anchorage students following the 6 shootings and bombings in Paris last week. But how can the motives and aftermath of the attacks be explained to a room full of teenagers?

“The main thing I want you to think about is the idea that terrorism knows no boundaries. It doesn’t know race, ethnicity and nationality,” East High School French Teacher Janeen Wilkins said to her class of first-year language students.

As students returned to class on Monday, Wilkins paused her regular lesson plan and instead had students create a “peace campaign.”

“East High School is the most diverse school in North America,” Wilkins said. “We represent the actual possibility of a peaceful coexistence together. We live and we work and we dream together every day.”

The students made posters to show support not just for Paris, but all countries recently attacked by terrorist groups.

One of her students, 17-year-old Baneen Albotaify, moved from Baghdad a year and a half ago and is a junior at EHS. Her father and most of her brothers still live in Iraq.

“I already lost three friends, three of my best friends in Iraq,” Albotaify said. “If I stayed in Iraq I don’t know when I’m going to die or what’s going to happen, which is really heart breaking. I wish I could do something about it.”

Albotaify said she may not be able to do much for Paris but she can show compassion.

The posters were written in dozens of languages and will be hung all around school.

“We come together and do this and put thought into making these because we actually do care about what happened,” said junior Bryce Griffiths.

Wilkins encouraged students not to focus on the attacks, but how they can give strength to one another.