Anchorage woman struggles to navigate snow-covered sidewalks with her walker 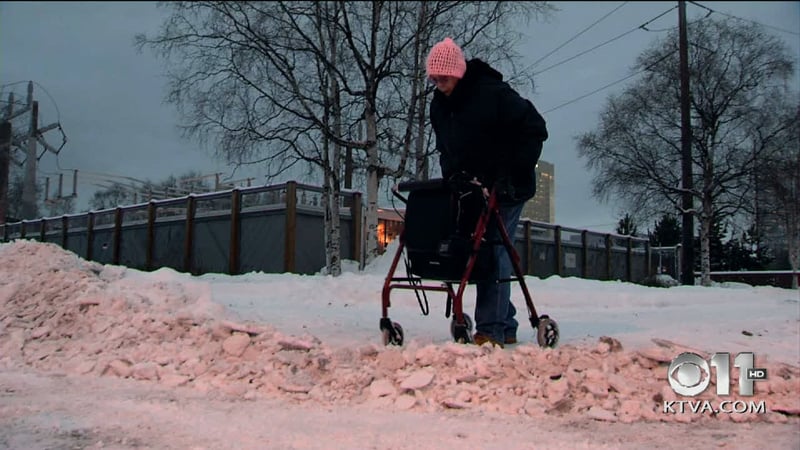 At 9 a.m. on a Tuesday morning, Lisa Harris-Chiklak is on her way to her local food pantry.

Harris-Chiklak says she’s out of groceries; she’s hoping to get some help from New Hope on the Last Frontier, located on E Street in South Addition.

The walk to New Hope is a little more than a half-mile from Harris-Chiklak’s downtown Anchorage apartment. Still, she says she has chilling thoughts before she steps out onto the snow-covered sidewalks.

As she steps onto Ninth Avenue, she immediately runs into a struggle as snow begins to surround the wheels of her walker, which she needs to get around.

“We keep hearing that the streets are pedestrian friendly in the winter time,” Harris-Chiklak said, often stopping along her route to shake the snow from her walker so the wheels don’t pull. “And they’re not. It’s dangerous in the winter time.”

Just blocks from her home, Harris-Chiklak says she’s afraid — as the snow sticking in her walker is causing her brakes to give her trouble now as well.

“For me, it’s a matter of, God, I don’t want to fall,” she said, noting that should she come across ice or face an inclined path, things could take a turn for the worst. “I could go downhill really fast, and I could fall.”

As she turns the corner onto E Street, the sidewalk conditions worsen. Harris-Chiklak’s breathing becomes heavier, as her walker turns into her personal snow plow. And for Harris-Chiklak, more effort equals more pain.

“I’m feeling numbness in my right hand,” she said. “And my legs are starting to hurt from having to push and struggle through the deep snow.”

Usually, the walk to New Hope takes 10 minutes, Harris-Chiklak says. Today’s trek took 35 minutes — she arrived out of breath with her muscles aching. But, she says, “You do what you have to do.”

Unfortunate news awaits at New Hope; the pantry is closed. The pastor advises Harris-Chiklak to try another pantry that may be open.

“I can’t walk that far,” she responds — in good spirits, all things considered.

Harris-Chiklak says pedestrians in Anchorage — disabled or not — take their chances navigating the snow-covered sidewalks. She says she’s happy to call Anchorage home, but she would be happier to have increased accessibility on the sidewalks she uses every day, especially as Alaska is only in the beginning of the long winter season.

The Municipality of Anchorage told KTVA’s Emily Carlson that crews plowed E Street sidewalks a few hours after Harris-Chiklak was outside. The director of operations says their goal is to plow all municipality sidewalks within 72 hours of a snow event, which means they have until 6:30 a.m. Wednesday to finish up.

The post Anchorage woman struggles to navigate snow-covered sidewalks with her walker appeared first on KTVA 11.