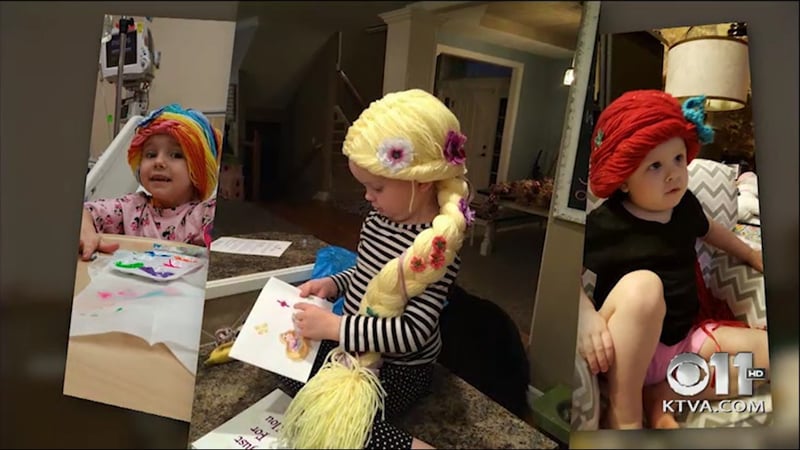 Palmer mother of three Holly Christensen doesn’t typically spend her days at Alaska women’s prisons. But she says the Magic Yarn Project isn’t just for little girls, it extends to everyone involved.

“We’re just bombarded with emails from all over the world. These little girls that need wigs and we don’t have enough,” Christensen said.

“We’ve made a mistake and we’re here but it makes a huge difference in somebody else’s life,” said inmate Odessa Vincent. “It’s like paying it forward, giving it back to the community.”

Vincent was one of about two dozen inmates making princess wigs for young cancer patients who’ve lost their hair to chemotherapy treatment.

“I think what they’re going to like is the sparkly part,” Vincent said.

The wigs will be sent to children all over the country. The free gift is meant to put a little magic back into the recipient’s life, but the prisoners said helping out is doing the same for them.

“This feeling will permeate and it will go out into the prison and the women who have been here today will have brightness and they’ll share that with other people and it will elevate the entire atmosphere of the prison,” said inmate Rischele Huntington.

Some of the women called The Magic Yarn Project “rehabilitating.” As they turned crochets caps into to bright, colorful hair, they said what’s most magical was their own transformation. Christensen said Lower 48 prisons have expressed interest in helping as well.

The wigs are free to recipients and The Magic Yarn Project relies solely on donations to pay for supplies and shipping costs.

Details about how you can get involved can be found on Facebook and GoFundMe.