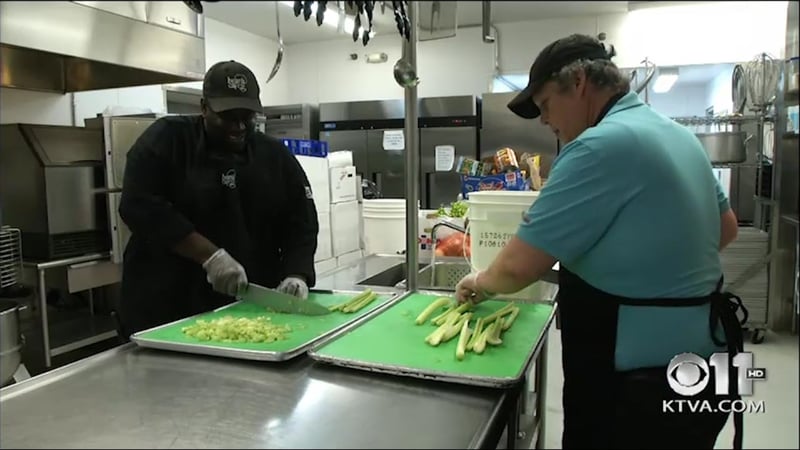 Trays of turkey are stuffed tucked into every nook and cranny of Bean’s Café’s freezer.

After a week of baking the holiday birds, he’s still in good spirits.

Dollison is one of the kitchen supervisors. He and the other staff members and volunteers have been preparing food for more than a week. On Thanksgiving Day they expect to feed more than 1,200 homeless people.

“As long as they like it I don’t mind the work,” Dollison smiled

On Wednesday afternoon, almost everything was done, except the stuffing. Dollison plans to make 40 gallons of stuffing with his own special twist: onions, peppers, celery and some secret spices.

“You can’t give out the Momma recipe, you know,” he laughed.

His mom taught him to cook at a young age. He found a home in the kitchen at Bean’s Café two years ago. Like many of the clients who use the homeless shelter, he knows what it’s like to fall on hard times.

“I got in a little trouble, a lot of trouble actually. I did some time,” he said. It was in prison where he learned how to cook in bulk for nearly 2,000 people.

“When I got out no one would hire me,” he said. “Bean’s gave me a second chance. I come here now and love what I do.”

There’s no place he’d rather spend Thanksgiving than in the kitchen at Bean’s with his family, giving back to the community.

“It’s everything. It truly is.”

The post Bean’s Café prepares to feed 1,200 on Thanksgiving appeared first on KTVA 11.