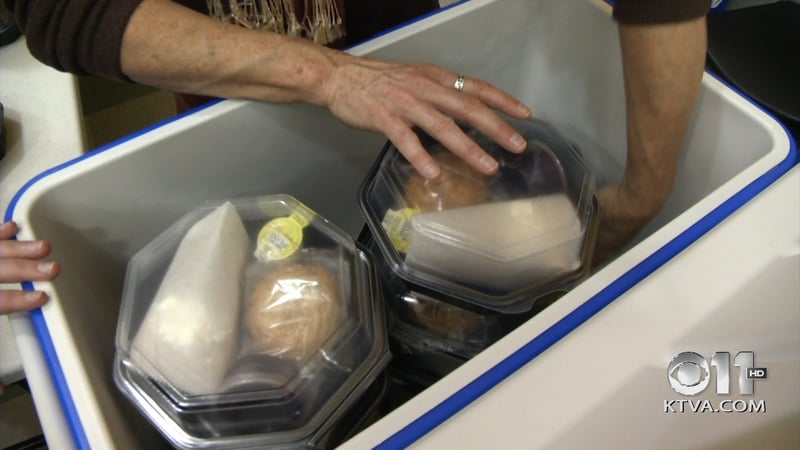 Long before the sun came up Thanksgiving morning, volunteers were hard at work at the Salvation Army’s McKinnel House.

There was an assembly line of people scooping mashed potatoes and piling on the turkey for more than 300 dinners for the Meals on Wheels program to make sure no senior citizens go hungry this holiday.

“I think that’s the main reason we do this,” said Colleen Kirkpatrick. “We’re sitting at home with a meal we’re able to cook that we’re fortunate enough to buy and cook and share with friends, and we want to make sure everyone else gets that chance too.”

Once all the meals were ready to go, it was up to other volunteers to deliver the goods.

“Altogether, 13,” said Heather Kepart. “Some hot, some cold, some newspapers, all kinds of good stuff.”

This year was Kepart and her husband Jesse’s first time being a part of the program. They were assigned an apartment complex in Fairview where they handed out the home-cooked food.

“It’s great. My grandma lives so far away in North Carolina, it reminds me of being with her. I can’t be with her right now so I can be with them,” Kepart said.

The Keparts moved to Alaska a year and a half ago. It’s just the two of them; they don’t have any family in the Last Frontier. Kepart said it was an easy choice to spend Thanksgiving giving back to people in need.

“The lady we just talked to was 92 years old and she’s seen so much and done so much,” she said. “It’s very humbling to bring someone a meal who’s probably cooked more meals than I’ll eat in my entire life.”