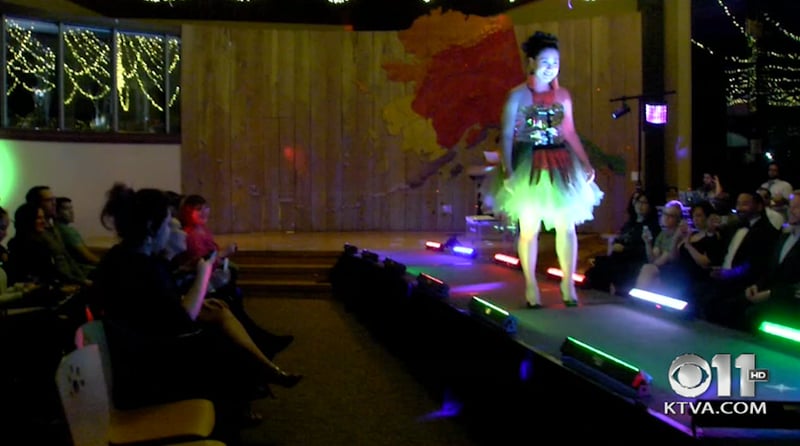 Five Alaska Native artists — Byron Nicholai, Samuel Johns, Allison Warden, Erin Tripp and Holly “Mititquq” Nordlum — received distinct awards created by various Alaska Native artists. For some, it was through drumming or rapping, others through acting and film-making. For Holly “Mititquq” Nordlum, of Kotzebue, it’s by reviving traditional tattooing techniques. She says a majority of women in the Arctic used to tattoo their chins symbolically to show their life goals, or to reflect that they were married or had children.

“Something like 70/80 percent of the women before contact had them,” said Nordlum. “So it’s very interesting to see how that changed with contact and how religion put pressure on people to conform. Now we’re taking that back, being independent, proud Native women.”

Nordlum says part of the importance behind the tattoo is that it’s permanent.

“I can’t wash off that I’m a proud Native woman,” she said.

Nordlum is currently working on a documentary about the Alaska Native tattooing tradition called “Tupik Mi.”

The awards were followed by the first annual “Village Vogue” fashion show. Artists from around Alaska designed pieces with materials from their own villages, which featured items like mosquito nets, seal skin and porcupine quills.

“We’re celebrating our culture,” said Rochelle Adams, an Alaska Native artist of Athabascan, Inupiaq and Japanese heritage. “We have beautiful, rich cultures that we all come from and to show that we’re still here, we’re still creating art. It’s not just things you see in the museum that’s stagnant.”

Correction: An earlier version of this story referred to the second annual “Village Vogue” fashion show. This year was the first fashion show. The story has been corrected.