FRANKLYWNOW - Anchorage Fire dispatch coaches 911 callers through CPR to save

Anchorage Fire dispatch coaches 911 callers through CPR to save lives 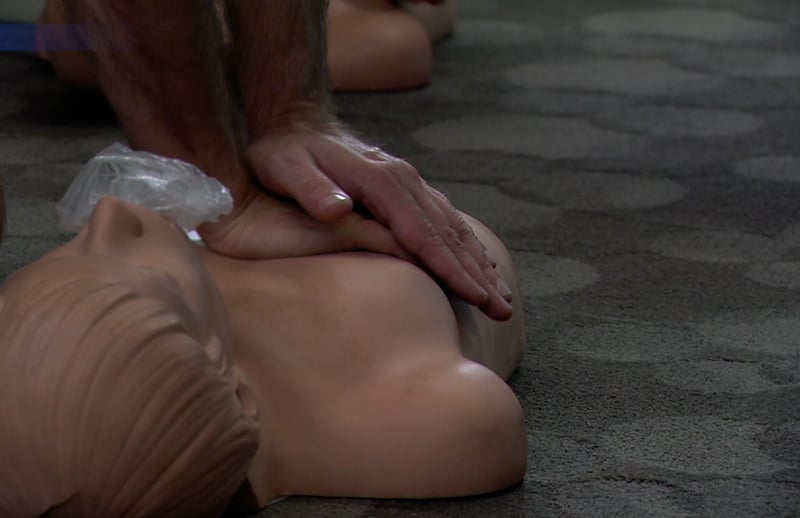 Stephenie Wolf says having to dial 911 after a loved one suffers cardiac arrest is stressful, to say the least.

“It’s the worst day of their life, and they’re not trained to call 911,” said Wolf, lead dispatcher for the Anchorage Fire Department.

In her experience, Wolf says a lot of people think the dispatcher is the barrier to help — “stop asking me the questions because help’s not coming,” she gave as an example.

But Wolf says it’s quite the opposite. When it comes to saving the life of a loved one, she says she and her fellow AFD dispatchers are there to help.

AFD says the majority of cardiac arrests happen in the home.

“The worst-case scenario is somebody not breathing,” Wolf said. “So that’s why we’re very, very aggressive in some of our call-taking.”

It only takes seconds for the dispatchers to determine is CPR will be necessary. It’s a two-question approach: 1. Is the caller awake? 2. Is he/she breathing normally?

“If they’re not awake and not breathing normally, we’re going to pump the chest,” Wolf said. “You’re not going to hurt them by doing CPR when they don’t need it. But the idea is you might kill them if you don’t.”

Within seconds, the dispatchers are coaching the callers through the technique:

Get her flat on her back on the ground … Kneel by her side … Put your hand in the center of her chest, right between the nipples … Put your other hand on top of that hand … With straight arms, push down as hard as you can, just like you’re pumping the chest, let’s push.

The sound of a metronome accompanies Wolf’s voice, so the caller can keep track of the pace.

Dispatch-assisted CPR is a program AFD medical director Dr. Michael Levy says the department has carried out for years. But the method is a little different. In this case, there’s no mouth-to-mouth involved; the process is compression-only.

“People that suffer sudden cardiac death — who collapse after they were basically doing OK up to that point in time — you know, honestly, they just had a big breath of air in their lungs,” said Levy, who has been with AFD for more than 20 years. “Now, their heart’s not working right anymore, so their need for that oxygen is not really there.”

Levy says what the person needs is a heart — something the caller or a bystander can give them, with constant compression.

AFD says the dispatch-assitsted CPR program has seen great results, and it’s optimized AFD’s interaction with the public through the dispatchers.

“I had one of the survivor’s wives tell us, you know, the dispatcher gave her empowerment,” Wolf said. “Because she thought, my husband’s 200/300 pounds — how am I going to pull him off the couch? Well, that voice on the phone is telling you that you can.”

Wolf says when it comes to a cardiac arrest report, dispatch is there to help the caller do their part until help arrives, a comforting voice in the time of crisis.

The post Anchorage Fire dispatch coaches 911 callers through CPR to save lives appeared first on KTVA 11.