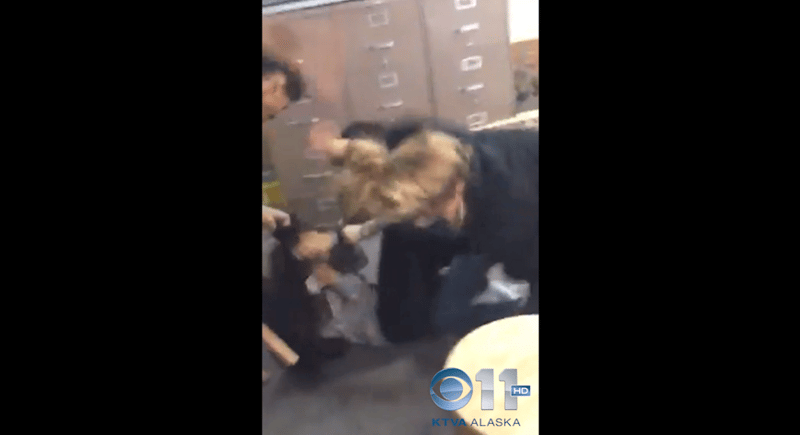 ANCHORAGE — The father of an Anchorage teenager who was filmed being beaten by a group of fellow teens has filed a lawsuit against the homeowner where the attack allegedly occurred, seeking more than $100,000, according to court documents.

The video, which was recorded July 26, 2015, shows a group of girls — ranging in age from 13 to 17 years old — kicking, punching and pulling the hair of Naomi Johnson, who was 14 years old at the time of the incident. Two 18-year-old males were also present and are considered participants.

“She walked halfway there, and they picked her up,” said her father, Wayne Johnson. “She walked into the garage, sat down, and she was texting on the phone, and then somebody… got up on her pool table and started filming. And then a few seconds later they attacked her, so it was premeditated.”

Johnson said the attack appears to have been orchestrated by a girl Naomi was friends with for three years. He said the beating may have stemmed from an incident when the family caught her stealing from them after choosing to take another of Naomi’s friends on vacation with them instead of her. He said they were granted a restraining order against the former friend.

The alleged assault was reported to police the same day, and the video was sent in about two weeks later, according to a statement from the Anchorage Police Department.

“When the police came, they went and talked to the other girls, and the other girls said Naomi started it. And then a few weeks later the video came out that they posted, or a few days later, and it shows that Naomi didn’t throw one punch, she didn’t do anything,” Johnson said.

Anchorage police have reportedly wrapped up their investigation into the incident. A final report will be sent to the Division of Criminal Justice, who said Monday it has not yet received anything from police.

“Criminal charges have not been filed at this time, but this case is still being worked and it doesn’t mean there won’t be eventually,” said police spokesperson Jennifer Castro.

While no charges have been filed against the teens involved — none of whom have been named due to their ages — Naomi’s father has filed a lawsuit against Deanna Kirgis, the owner of the home where the beating allegedly occurred and mother to one of the girls involved, according to court documents. (Read full lawsuit below.)

In the lawsuit, Johnson alleged Kirgis “negligently and/or recklessly” allowed the beating to happen by not properly supervising. He further charges Kirgis allowed the teens to drink at her home and failed to rescue or assist Naomi when the others were hitting her.

Johnson also stated he believes the other teens unjustly imprisoned Naomi by not allowing her to leave while they beat her.

Along with the assault, Johnson alleges the teens took his daughter’s phone and sent a naked picture of her to others, who then published it online.

“One of the girls sold Naomi’s cellphone. We got a phone call asking her to give the code to unlock it, because GCI told them to do that, and Naomi said, ‘That’s my phone and it was stolen,’” he explained.

Naomi has since left her old school because of the incident and threats from some of those involved, according to her parents. Anchorage School District spokeswoman Heidi Embley said in a statement school officials have “no jurisdiction in this case since it didn’t involve activity at our schools.”

“There is no indication of any threats or incidents happening at any school related to this police case. Due to student privacy, the district will not comment specifically about student discipline cases. When incidents occur off of school grounds which could have an impact on school operations, The Anchorage Police Department works closely with administrators at our schools to ensure student and staff safety,” Embley wrote. “If a parent ever has a concern about safety at their child’s school, the parent should speak with the school principal immediately.”

Naomi’s father, however, said a girl threatened Naomi while at school, telling her one of the girls involved in the attack had a knife and would use it to kill her. He said it wasn’t clear if either girl had a knife on school property.

Johnson said he hopes justice is served, and that his daughter will be able to fully recover, both physically and mentally.

“I want Naomi not to be in pain anymore, and emotionally she’s still messed up from it,” her father said. “She had bruises up her arms, all the way up her neck and head, on her back…She had severe headaches, she just laid in bed all the time, I mean, it took a couple weeks to recover.”

Whether or not the teens receive consequences will likely be kept confidential, unless they are charged as adults.

KTVA visited the home where the attack took place and spoke with the homeowner’s daughter, who Johnson said filmed the attack. She asked us to come back later to speak with her mother. When we returned, the blinds had been shut, and the lights turned off.

When reached for comment Tuesday, the attorney for Deanna Kirgis promptly hung up, saying, “We have no comment.”

Editor’s Note: Naomi Johnson’s age is mentioned at 17 in the video above. She was 14 at the time of the incident.