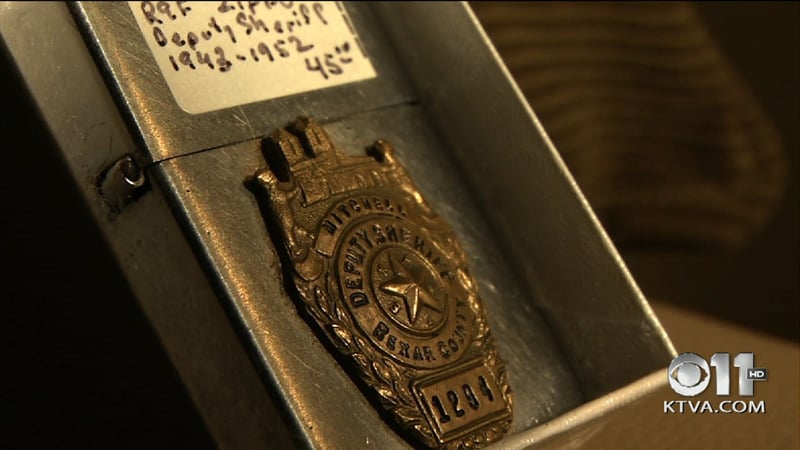 Doug Williams may live in Alaska for now, but he’s proud to call Texas home. He lived in San Antonio for years.

“Before the city annexed my neighborhood the Bexar County Sheriff’s provided the service. I was a volunteer firefighter out there,” he explained.

Around Thanksgiving he found a 1950s-era Zippo lighter in an Anchorage antique store. Emblazoned on it, a badge from the Bexar County Sheriff’s Department.

“I saw the badge, it stood out like a sore thumb,” Williams said.

He bought it for $45. Then noticed something else on the badge.

“I picked it up and took a closer look at it I saw the name and badge number. I had a gut feeling this needed to go back to the family or the person if I could find him,” he said.

One Facebook post, three days and nearly 6,000 shares later the mystery was solved. The lighter belonged to a Stan Mitchell. But finding him took a group effort.

After being contacted by Williams, the Bexar County Sheriff’s Office looked through records and tracked down Stan Mitchell. The next day Mitchell’s nephew in Texas called to tell him he saw the Facebook post about the lighter; the story also made the local news in San Antonio.

Mitchell’s wife Trudi Largent Mitchell also saw Doug Williams’ Facebook post. She commented that the lighter belonged to her husband. “He would LOVE to have his lighter back. He cannot figure out how it ended up there,” she wrote.

It turns out Stan Mitchell also lives in Alaska.

Mitchell got the lighter when he was working for the Bexar County Sheriff’s Office in the early 1980s. A few years later it was stolen from his home in Fort Worth, Texas.

Williams said the antique dealer told him someone from California pawned the lighter.

Somehow, both Mitchell and the lighter ended up in Alaska some 30 years later.

Tuesday morning, Mitchell met Williams at his home in Anchorage.

“Does this look familiar?” Williams asked.

“My goodness, I never thought I’d see this again,” Mitchell said as he held his lighter for the first time in 30 years.

Mitchell’s not a smoker; His wife gave it to him as a gift when he finished SWAT training. It was the first in his collection of vintage lighters.

“I’d forgotten about it over the years, then out of the blue you get a call. Yeah, I’m really happy,” Mitchell said.

It’s a bizarre series of events from the Lone Star State to the Last Frontier that finally brought the lighter home.

“It’s amazing where things end up, it really is,” Mitchell said.