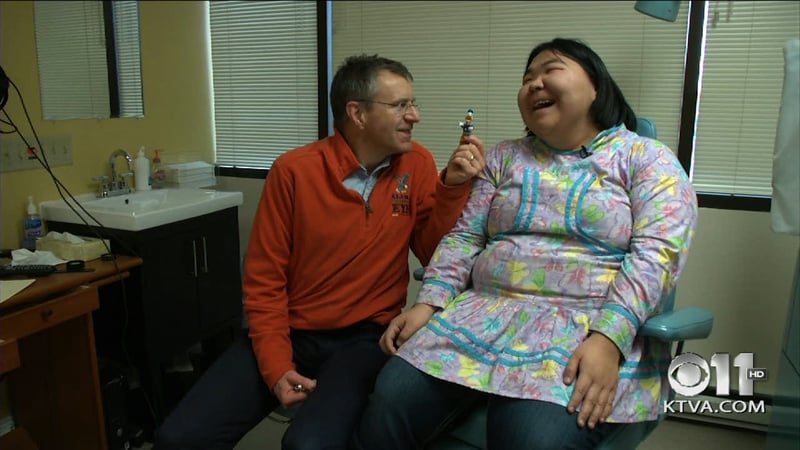 Visits to the eye doctor are a regular part of Destiny Nash’s life. Now 18, she’s been traveling from Chevak to Anchorage to see Dr. Robert Arnold since she was 3 years old.

That’s when she was diagnosed with Retinitis Pigmentosa, a degenerative disease that’s slowly stripping her sight.

“The only thing I can see in the dark are the lights around me. But nothing on the ground,” Nash described.

She can still see out of the center of her eye, but is legally blind when it comes to her peripheral vision.

“You get a gradual tunneling of the vision with potentially retained ability to read a chart,” Arnold explained.

He said Nash’s case is advanced; she may be completely blind in just a few years.

Until that happens she remains optimistic and says she’s got a long list of places she wants to see. She’s never traveled out of Alaska.

She’s raising money online through Go Fund Me to make her dreams come true. She wants to see exotic fish in a big aquarium, take in the sights of the Lower 48 and first and foremost, a visit to Disney Land.

“To go on cruises and train rides would be really cool to experience,” she smiled.

Her grandmother, Rachael Kopanuk Fultze, takes care of her. Nash’s mother passed away five years ago.

“I just hope for the best,” Kopanuk Fultze said. “It’s been heartbreaking, but I see hope in technology and my belief in God that she’ll pull through. You never know. We don’t know what’s going to happen in the next few years.”

They plan to make every one of those years count.

“I love Alaska,” Nash said. “I just want to experience what is out there.”