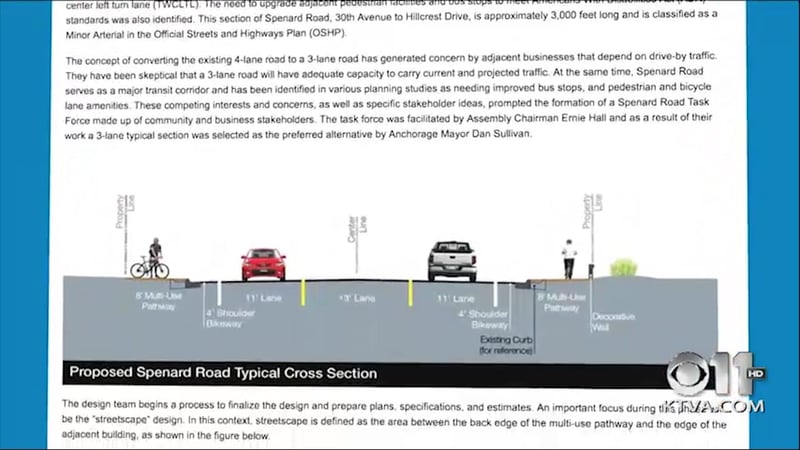 For better or worse, Spenard Road is arguably the most famous thoroughfare in Anchorage. Its length is lined with stores and restaurants of every variety, most of which are locally owned.

For more than a decade, there has been an effort to further revitalize the area with a reconstruction project. Now the municipality and some community members are making their biggest push yet to make the proposal a reality.

Last week, residents in the Spenard area received a pamphlet outlining the plans for the project. It would add bike lanes and widen sidewalks while decreasing the number of lanes for cars in parts of the road.

“Safety is the key. And a four-foot sidewalk with snow and ice piled on it just isn’t safe,” said Mark Butler, a member of the North Star Community Council and longtime Spenard neighborhood activist.

He said the project has gained momentum in recent months.

“The overwhelming number of businesses are in favor of it,” Butler said. “But even those that are in favor want a good construction project.”

Some are concerned the project will replicate the reconstruction of Arctic Boulevard, which took longer than planned to complete and, according to some, made certain intersections more congested during rush hour than they were before the project.

“Arctic was a real bad example of how government can really make a mess out of a project,” said Baxter Gamble, who owns The Printer Store at Fireweed Lane and Spenard Road.

Gamble said the small businesses that line Spenard Road are vulnerable and the risk of decreasing access during construction is too great for the project to move forward.

“We don’t want people getting hurt, we want it accessible, we want it clean and neat and that sort of thing,” Gamble said. “But if it makes it too difficult for people to come here, they’ll just go some place else.”

The project proponents said the municipality learned from its mistakes while rebuilding Arctic Boulevard.

“The city has taken those lessons and made sure they don’t replicate the worst of Arctic here,” Butler said.

The project is estimated to cost $14 million. To move forward, it would have to be approved by voters as a road bond on the April 5, 2016 ballot. If passed, planning for the reconstruction will take place in 2016 and construction is slated for the summer of 2017.