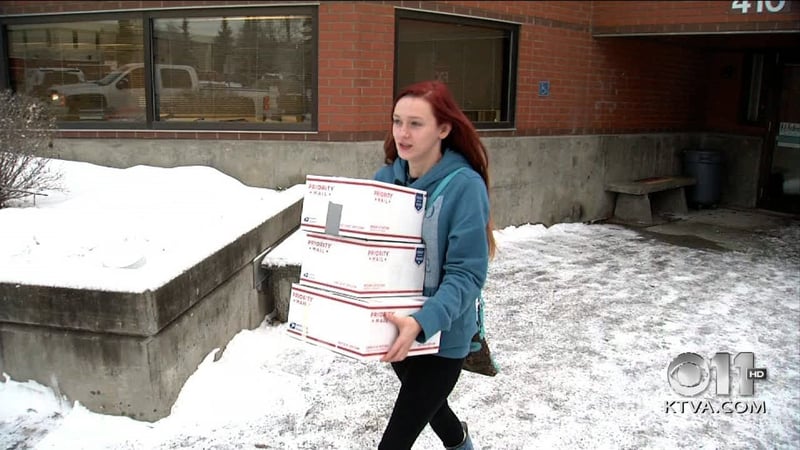 While most Anchorage shoppers still have a couple weeks to ship holiday gifts to family, high school junior Joie Jackson is just about done packaging her long distance presents.

But instead of sending just a few gifts this Christmas, Joie and her classmates at SAVE High School have boxed more than 60. All of them are heading overseas to her brother, Jacob, who is serving in the Army.

“He’s in Iraq. He’s been deployed four times,” Joie explained. “This deployment has been pretty rough for him because he is missing his daughter’s fifth birthday, his son’s first steps, first words, first everything.”

He is also missing Christmas.

All he asked was for his family to send him a box of cookies, but they decided they could do much better. Joie started a competition at her school to see which class could donate the most “Treats for Troops.”

“Our school is kind of competitive, so they announced it and each class brought as much as they could,” Joie said.

Students collected thousands of items and made cards to send to the soldiers stationed with Joie’s brother.

“I hope they just get a thrill of appreciation,” said senior Marina Perez.

But perhaps the best part is that Jacob has no idea the packages are coming.

“He doesn’t know anything about this,” Joie said. “He thinks we forgot about the cookies actually.”

This is her simple way to say thank you to service men and women.

“I think it’s awesome,” Joie said. “It makes me really happy that we actually get to do something for them.”

On top of the more than 60 care packages from the students, others donated an additional three pallets-worth of food. It’s all being shipped for free and is expected to arrive right around Christmas time.

Joie hopes these treats bring the soldiers a little taste of home while they’re away.