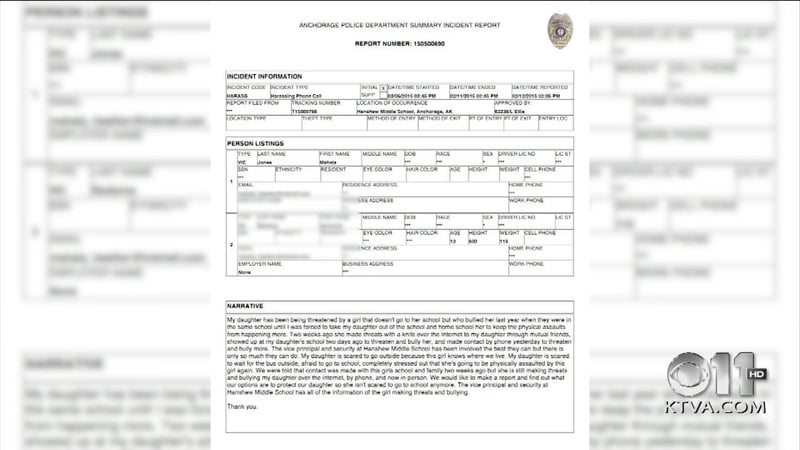 Holes in the wall at the Johnson home show the emotional aftermath of a brutal attack.

“She was carrying around a lot of anger,” said Wayne Johnson, explaining his daughter, Naomi — who was the victim in a violent attack video — punched holes in the dry wall in the days following the beating.

Johnson said it took weeks for Naomi to heal physically after several of her former friends lured her into a setup and jumped her, and the emotional scars may never heal.

“Several families have come forward, and one with the exact, identical thing that happened to my daughter Naomi,” Johnson said. “She was attacked, beat on, threatened, bullied, and it’s by the main girl in this that was on the video, the heavy girl that attacked Naomi and was stomping on her head. That girl was the one that threatened this girl.”

A police report filed by the girl’s mother, Mahala Jones, said the girl in the video — who’s been called the ringleader of the group — also terrorized her daughter, threatened her with a knife, assaulted her and bullied her until she was so scared she wouldn’t leave the house.

Jones said, like the Johnsons, they also notified the Anchorage School District, who both families say told them they couldn’t do much to keep their children safe. The Jones family told us things got so bad, they finally moved out of Anchorage in June, just one month before Naomi was attacked.

KTVA reached out to the school district, but the spokesperson couldn’t comment on the Jones’ case because she was not immediately familiar with it.