FRANKLYWNOW - Co-working in Anchorage: Ensuring Alaska will be home base for b

Co-working in Anchorage: Ensuring Alaska will be home base for business owners 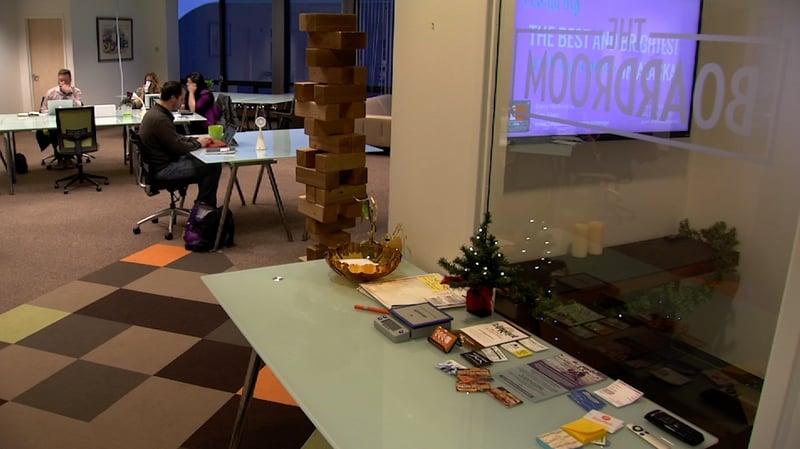 Cubicles are forbidden at The Boardroom.

“The majority of our members pull up a laptop, hook up to the wi-fi, run their businesses — sitting at a desk working with other people,” said Boardroom co-founder Katherine Jernstrom. “It provides a good opportunity for them to collaborate with other people from other companies.”

About two years ago, Jernstrom and her co-founder started The Boardroom in Anchorage after she noticed budding entrepreneurs weren’t blossoming in their home state.

“We kept coming up with the same problem, which was smart, innovative people — our peers — kept leaving the state,” she said. “We wanted to create a space that was challenging, where they could connect with like-minded, talented people and grow a business here, instead of seeking that outside.”

Cue the co-working model, started in 2005, where start-up companies share their work environment instead of opting for a standalone office space. The Boardroom is home to everything a start-up hopeful needs — dry-erase surface desks for brainstorming and to-do lists, conference rooms for meetings and workshops, First Friday events for networking, even an open pitching forum to make sure their start-up plan is on the right track.

“There’s people working on widely different businesses, and they’ll see things from a perspective you never considered,” said Ben Kellie of his fellow Boardroom members. “Just going out to coffee or lunch with them, you’re going to get a lot of new ideas and a lot of perspective on what your doing. And it’ll really help you branch out and validate your assumptions.”

In the short amount of time in which Anchorage has adopted the co-working model, Jernstrom says The Boardroom now houses just under 100 businesses.

“And our members range from solos and freelancers to small businesses,” Jernstrom said. “Remote workers — where their main parent company is out of New York or Seattle, and they’re just the Anchorage office in here.”

The Boardroom is home to both novice entrepreneurs and seasoned start-up owners, like Lance Ahern, founder of Internet Alaska. Having founded the first internet business in the state, Ahern knows a thing or two about what it takes to get a business off the ground.

“It’s just something that we really needed,” Ahern said of The Boardroom, adding that the success of Jernstrom’s venture speaks to the entrepreneurial spirit of Anchorage. “Anyone who’s interested in starting a new business, we really try to get them to come here and check it out and become part of the community.”

Kellie, co-founder of K2 Dronotics, is working to deploy drones across Alaska. When he pops into Anchorage from the Kenai on business, he now has a professional place to call his own.

“It gives me a known spot that I can meet people at,” Kellie said. “Instead of having some rented office space … or instead of sitting at home and working, it gets you out with people.”

While home offices are insulated, they also can be a turnoff, Jernstrom says.

“I got an email from a gentleman two days ago, and he told me he was sick and tired of losing clients, having folks come to his home office,” she said. “So he came for a tour and signed up.”

Plus, the time spent furnishing and maintaining office space is time owners aren’t spending on their business, says Ahern, who adds that even as a successful entrepreneur, he’d rather operate out of The Boardroom.

In addition to cultivating a creative and collaborative space, potential investors know they have a place in The Boardroom to scope out should they want to back an idea — because if money isn’t being made, “you don’t have much of a start-up; it’s called a hobby,” Ahern says.

Often, when it comes to the sink-or-swim world of start-ups, all that’s needed is a chance to compete, Ahern says.

“Unfortunately, sometimes some fairly talented people do leave the state,” he said. “But I think having more and more of this kind of basic infrastructure here is really critical for keeping talent local, when they can see that they’re part of a larger community.”

Some companies have “grown out of” the Boardroom and have set up shop elsewhere, says Jernstrom. In that same vein, Kellie says he hopes his drones will take him to places beyond the Last Frontier as well. But, he adds, his start-up started in Alaska — and he’ll never outgrow the place he calls home.

The post Co-working in Anchorage: Ensuring Alaska will be home base for business owners appeared first on KTVA 11.