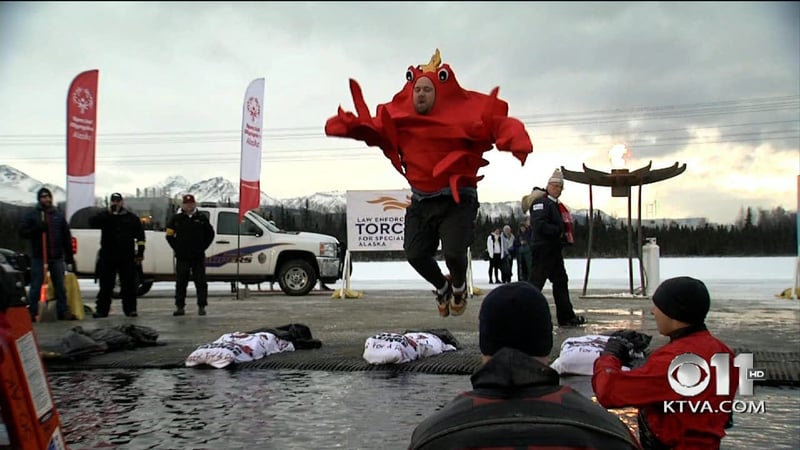 For the seventh straight year, hundreds of Alaskans eagerly fulfilled the motto of the Polar Plunge: “freezin’ for a reason.” The annual fundraiser raised more than $300,000 for Special Olympics Alaska, according to the organization’s president, Jim Balamaci.

“It just warms the heart to see Alaskans coming together around the holiday to support people with intellectual disabilities statewide,” he said.

Eight hundred people participated in Saturday’s event. Many came with coworkers as part of an office-wide fundraiser.

“This year, we have the biggest team we’ve ever had. We’ve been doing it for about four years now, and we’re hoping to keep doing it every year,” said Linnzi Doerr, who was jumping alongside coworkers from R&M Consultants, which raised roughly $2,000.

While plungers in past years have had to endure sub-zero air temperatures, the weather on Goose Lake midday was a mild 27 degrees.

“I’m so excited about the temperature. We’re just praying that the wind does not pick up. We want to get in there and get out as soon as possible,” Doerr said.

Most people were only in the chilly water for a few seconds before clambering up a ladder on the opposite side. Once they emerged, they were handed a fresh towel from a Special Olympics athlete.

“It feels good. I’ve been thanking all the plungers before they jump in,” said Ayesha Abdul-Jillil, who competes in bowling, snow shoeing and track and field.

After the plunge, participants ran inside for a quick jump in a hot tub to raise the body’s temperature.

Organizers said they hope to keep growing the event each year.