FRANKLYWNOW - What to do when you fall through: JBER crew learns cold water re

What to do when you fall through: JBER crew learns cold water rescue techniques 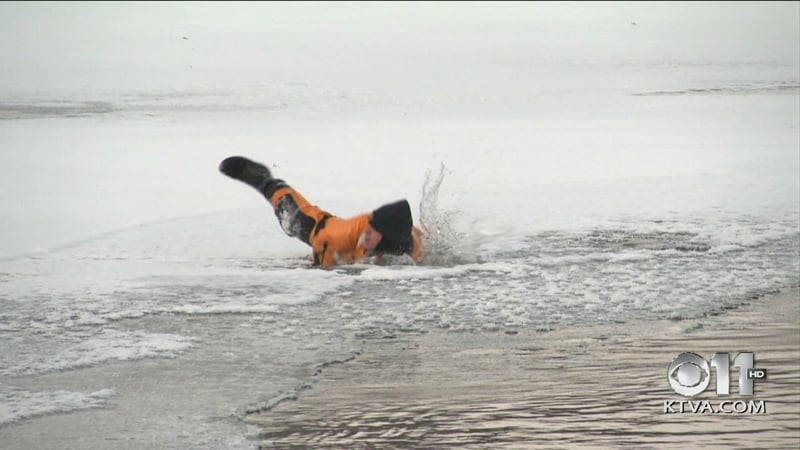 There are more than three million lakes in Alaska. While many of them are now covered in ice thick enough to support vehicles, there are still plenty of places where flowing water and underwater springs can make thin ice a serious threat.

At Joint Base Elmendorf-Richardson, the Fire and Rescue Services team spent Sunday rescuing themselves – and one another – from a frozen lake.

“It’s all based on a self-rescue approach. If I can get myself out, I can get somebody else out,” said Adam Bowens, the instructor of the course.

Bowens led about one dozen civilian and military members of fire and rescue services through a number of exercises. He said the training is designed to be fun.

“If you like what you’re learning, you’re going to want to pay attention to it,” he said.

Bowens and his trainees donned watertight suits to practice rescues. If worn properly, they completely insulate the body from the frigid water. However, the face is exposed. Everyone training had to go under the surface to experience how the water felt against bare skin. Because the area they were training in had flowing water, the temperature was barely above 32 degrees.

Bowens said most people who die after falling through ice drown; rarely do they last long enough to succumb to hypothermia. He said the body will instinctually go into shock, but it’s crucial to remain calm and keep breathing steadily.

“Concentrate on doing nothing but breathing,” Bowens advised.

After that point, work on lifting yourself out and distributing your bodyweight as evenly as possible. In other words, don’t stand up until you’re certain you’re on stable ground.

The post What to do when you fall through: JBER crew learns cold water rescue techniques appeared first on KTVA 11.