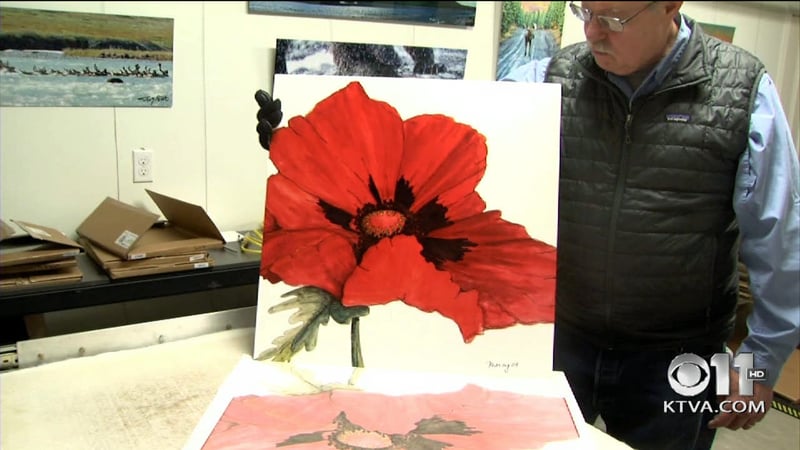 An Anchorage photographer is taking his business to a new level. Ed Bennett is printing photos and other artist prints on large pieces of metal.

Bennett explained that at first, his business started small, literally. He and his wife, Georgia, began Bennett Images in 2003 by printing small photos on paper. But as the business grew, so did the size of their printers.

Six years ago, the couple added the ability to print on canvas. They purchased a special printer and were able to create large scale images on canvas. The results were beautiful, but Bennett said as soon as he saw his first image on metal, he knew he wanted to try it.

Bennett called printing on metal “a whole new ballgame.” He moved his studio into his garage and invested in even more sophisticated printers. He explained that printing on metal starts first on paper. The image is printed on a special paper using special ink.

A thin piece of aluminum is laid over the print which is put in a special machine. The machine applies pressure and heat, up to 400 degrees. In less than three minutes, the image has been transferred from the paper to the metal.

Images printed on metal are striking, saturated with color and detail. Bennett said the process works well for photography as well as paintings and prints that he scans. He said his business has become so successful that a good chunk of it is now devoted to printing other artist’s work.

Bennett said metal is gaining in popularity and he’s glad. He said he’s excited to be able to create art that people want to own.

Editor’s Note: Ed Bennett is an employee of KTVA News.