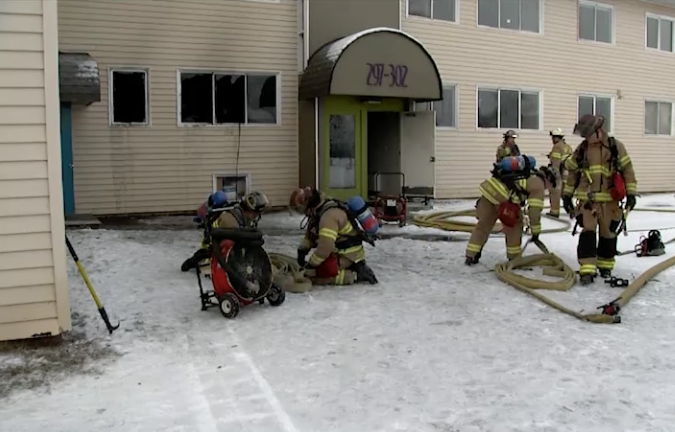 One man was taken to the hospital after a fire ripped through a Government Hill apartment complex late Thursday afternoon, and he has three good samaritans to thank for saving his life.

The crew was working in the complex on Richardson Vista when Iaea said he smelled smoke. When they realized it was a quick-moving fire, the three immediately jumped into action.

“We took our own route, just started knocking on doors to get everyone out,” said Iaea. “We pulled the fire alarm. It turns out the stairwell I went up, there was a guy trapped in his apartment there.”

Firefighters routinely advise people to never go back into a burning building once they’ve escaped.

“While we can’t confirm or deny whether or not there was a citizen rescue here, people should avoid going back into a burning structure,” said John See, spokesperson with the Anchorage Fire Department. “If you can help somebody from outside the structure, that may be the best thing you can do to help somebody.”

But, according to Iaea, the smoke billowing out of the apartment was so thick he couldn’t see through it, and he said he couldn’t ignore the man’s screams for help.

“I heard him. He was close to me but I couldn’t see him,” said Iaea. “I was already choking. I felt his shirt and grabbed him and pulled him out. We came all the way out and he had burns all on his face and everything,” he said.

According to Gionson, there was another man in the building who needed help — a maintenance worker trapped on the third floor.

“He was already halfway out the window when we came back with the ladder. We got him the ladder, he got down. We finished evacuating the building,” said Gionson.

The men said rescuing the tenants was “the right thing to do.” They’re glad more people weren’t injured in the fire.

The cause of the fire is still under investigation, according to the Anchorage Fire Department.

“What happened today was pretty significant”

Twenty units responded to the apartment complex on Richardson Vista after firefighters received the two alarm call at 11:44 a.m., according to See.

The call came hours after Anchorage firefighters first responded to a two alarm call at a fourplex on Lunar Dr. at around 3 a.m. Three families living in the building were displaced as a result of the fire, which did extensive damage to the roof and attic of one of the units.

All 11 of the displaced have since found places to stay with friends or relatives, according to the Red Cross.

The organization is working to provide financial help to one of the displaced families. The other two reportedly had insurance.

“It’s been about nine years since we’ve had two back-to-back second alarm fires, so what happened today was pretty significant,” remarked See.