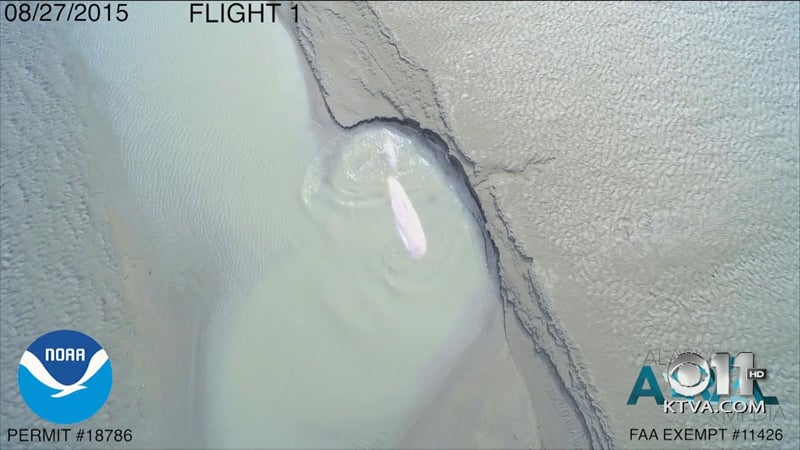 Biologists with the National Oceanic and Atmospheric Administration (NOAA) are now using drones to track Cook Inlet belugas. They used the technology for the first time in August when someone reported a stranded beluga along the Turnagain Arm.

NOAA contracts with Alaska Aerial Media, a company that already has the proper Federal Aviation Administration permits to fly an unmanned aircraft system.

When the drone flew over, biologists found out it wasn’t just one beluga stuck on a low tide, but a mom with her baby.

“That was a really good finding because from the road system, the elevation is different from in the air,” said marine mammal biologist Mandy Migura.

They were also able to fly back over the area when the tide came back in and saw both animals were able to swim away.

Migura said using the drone is part of an effort to enhance NOAA’s response to stranded whales. She said it’s important for biologists to respond to stranded animals as soon as possible to ensure they do everything they can to get the belugas back into the ocean.

“We’re very concerned about them which is why we’ve highlighted Cook Inlet beluga whales as one of our species in the spotlight campaign species,” Migura said. “We realize they’re in danger, we need to do everything we can to help bolster their numbers and recovery potential.”