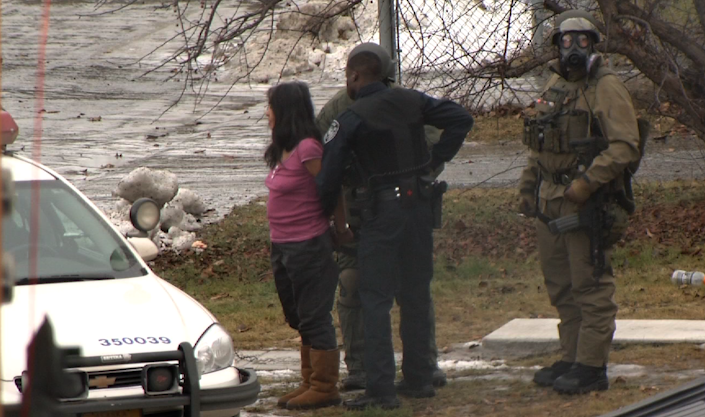 Anchorage police have arrested a woman on charges of third-degree felony assault after she threatened people inside an Anchorage assisted living home with a butcher knife, according to officials with the Anchorage Police Department.

SWAT and Anchorage police used a low-level gas — equivalent to pepper spray — to force the woman out of the facility. As teams entered the home, the woman was found sitting on the couch smoking a cigarette, according to Officer John Daily with the Anchorage SWAT.

“We tried our best not to put ourselves or to put her in a situation where we had to hurt her,” said Daily. “She was mentally unstable, I don’t know all that’s going on with her, but the indication was that mentally there were some problems there.”

The woman was taken to the Anchorage Jail and is being held on $1500 bail.

Police spokeswoman Anita Shell said the initial call came in at 5:51 a.m., reporting the woman had a knife and had threatened people inside an assisted living home, where she is a resident. When police arrived, no one was inside the building with the woman.

“She has barricaded herself inside the home and refuses to come out,” police said.

“Gas may be deployed in an attempt to apprehend the suspect,” police wrote. “There is a low risk factor with this gas deployment; however, police would like to alert citizens with any respiratory problems.”

Juneau Drive is closed between 16th and 17th Avenues while police attempt to resolve the situation.

Shell said the Anchorage SWAT responds to calls for barricaded subjects at least once a month.

Editor’s note: An earlier version of this report stated the suspect was a male. This has been corrected.