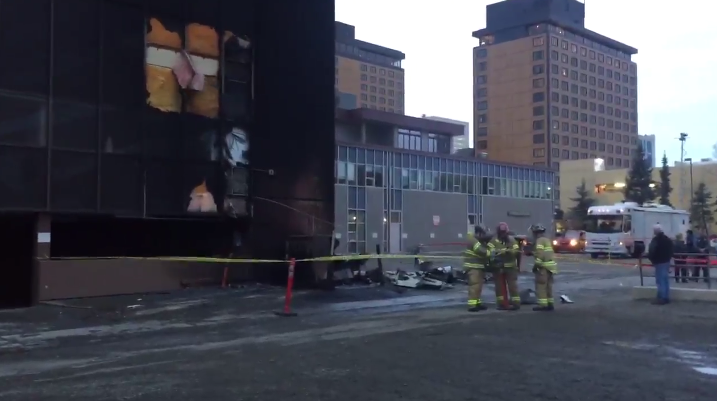 A seemingly normal workday was just getting started for many people in downtown Anchorage when a single-engine Cessna 172S, piloted by Doug Demarest, clipped one office building before crashing into another.

Vincent Maiorana works across the street from where the crash happened at Snow City Café as a line cook.

He says the crash sounded like an explosion. He ran out to try to help and captured the fiery scene on video.

“At first it was just a small little fire right behind that little trash can. Small flames, maybe 8 feet up, and then the flames got higher and higher and just bursted in the parking lot,” Mairoana said.

Many of those who work in the buildings that were hit couldn’t look away from the damage.

“Just total shock. You don’t think that can happen in downtown Anchorage,” said Marion Kelly who works in the Pacific Office Center.

Jacob Langton heard about what happened on the news and like many others walked past the scene to see the damage for himself.

“I’ve been here all my life and I’ve never heard of something like this,” Langton said.

Pilot Bruce Webb works next door to the crash site. He made an emergency landing on Anchorage’s 7th Ave. in 2000 and says its hard knowing this pilot wasn’t as fortunate.

“It’s tough. Anchorage is the largest small aircraft airport in the world, so there’s a lot of us pilots out there,” Webb said. “It’s pretty tragic when one doesn’t walk away.”

Many people use the area between the damaged buildings to get to and from work.

“I’m really glad it happened when it did,” she said. “If it would have happened any later there would have been more people. It’s just still overwhelmingly sad.”

Heavy winds hindered the early investigation and it’s still unclear what caused the plane crash. One thing is certain, today’s crash has left a mark on Anchorage residents.