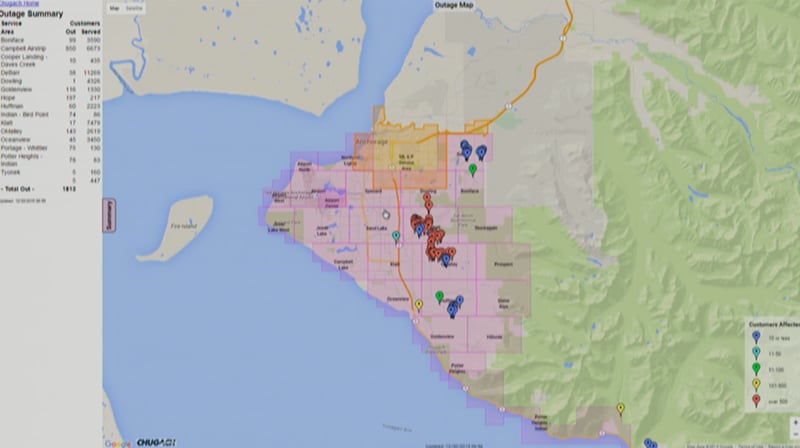 Strong winds overnight have caused scattered outages across the Chugach system in Anchorage.

In the Anchorage Bowl, southeast winds have been gusting 40 to 45 mph, with wind gusts of 60+ mph recorded at Glen Alps this morning.

An outage map at Chugach’s website shows where problems have been reported. More than 1,000 were without power, as of 7 a.m. Wednesday.

In the Valley, the Matanuska Electric Association is also reporting “wind-related outages” throughout its service area.

“Dispatch is currently busy assessing the situation and calling in crews,” a Facebook post from MEA reads.

For portions of southern Alaska, high winds continue to wreak havoc Wednesday morning. A high wind warning stretches from the Yukon Delta south to Bristol Bay and east to the Anchorage area, Kenai Peninsula and the Prince William Sound. Additional wind warnings are in place for portions of the Interior including Kuskokwim Delta, Denali, the Eastern Alaska Range, as well as Deltana and Tanana Flats.

Multiple gusts upwards of 75 mph or more have been recorded throughout the early morning hours in Iliamna and King Salmon. Other Southwest villages — such as Sparrevohn, South Naknek, and Koliganek — have also recorded high winds this morning.

Closer to Anchorage, hurricane force wind gusts have been reported throughout the morning. The McHugh Creek Recreation area reported a wind gust of 98 mph just after 5 a.m. That’s as strong as a Category 2 hurricane. At Bird Point, winds gusted to 84 mph overnight. High winds have also been blowing throughout the night for most areas of the Kenai, from Portage Valley south to Homer. The Palmer airport has been reporting sustained winds 20 to 30 mph this morning, with gusts upwards of 60 mph reported at times.

Conditions along coastal areas will remain breezy through the day, but inland winds will begin to subside by noon as the frontal system pushes east.