FRANKLYWNOW - Mother Lawrence: The woman who helped Mountain View gets some he

Mother Lawrence: The woman who helped Mountain View gets some help of her own 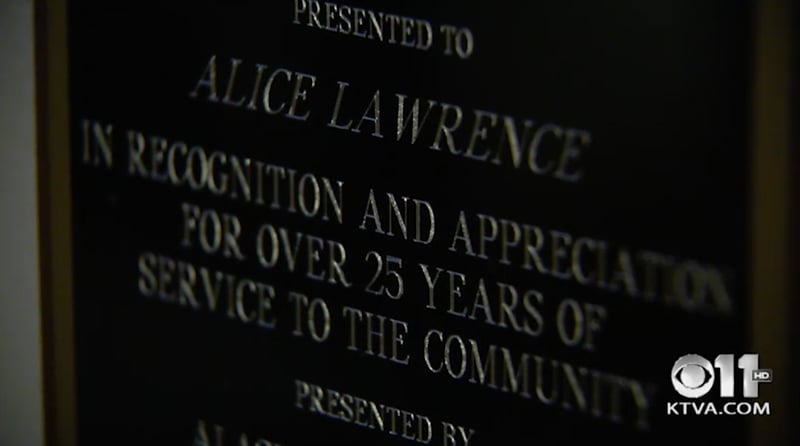 For more than four decades, Alice Lawrence has run a donation center out of her Mountain View home. She never turns anyone away, which is probably why people call her Mother Lawrence. But the woman who has given so much, is now in desperate need of her own help.

Mother Lawrence loves what she does, and she’ll tell you over and over again. She calls it her “job,” helping those in need. She sings bible hymns from the Casio keyboard in her living room, where she set up seven church pews to minister to the poor in her neighborhood. Out of her home, she runs a nonprofit that helps hundreds of people a year.

“She’s given away free food to children who need it, families who need it, without expecting anything back,” said Peter McGlashan, who knows because he’s seen first hand how generously the 80 year old gives.

Yet Mother Lawrence has neglected to take care of herself.

Dirt and grime caked the walls of her home. There’s mold in the corners of refrigerators and pantries that look like they haven’t been touched in decades. When McGlashan saw how bad things had gotten, he decided it wasn’t right.

“It was one of those things that when I walked in I was like, ew,” he recalled.

He told Mother Lawrence it was time people gave something back to her.

On New Year’s Day, a group of volunteers filled Mother Lawrence’s home. They’re from Akeela, a center that provides treatment to Alaskans facing addiction. They scrubbed the floors and rolled on a fresh coat of paint. Mother Lawrence could hardly believe her eyes.

But it’s going take a lot more than a good cleaning to fix all of Mother Lawrence’s problems. Her memory is failing. She struggles to remember names, and she repeats herself. There are also stacks of unpaid bills.

“I gotta find a way to find some money,” she said. “I’m not gonna close my doors, because the way they were talking, if you don’t get this paid, we’re gonna sue you.”

The volunteers can’t cure her, but they can make sure this Mountain View matriarch has a clean home to keep doing what she loves. Her calling — to help any Alaskan who shows up at her door.

The post Mother Lawrence: The woman who helped Mountain View gets some help of her own appeared first on KTVA 11.