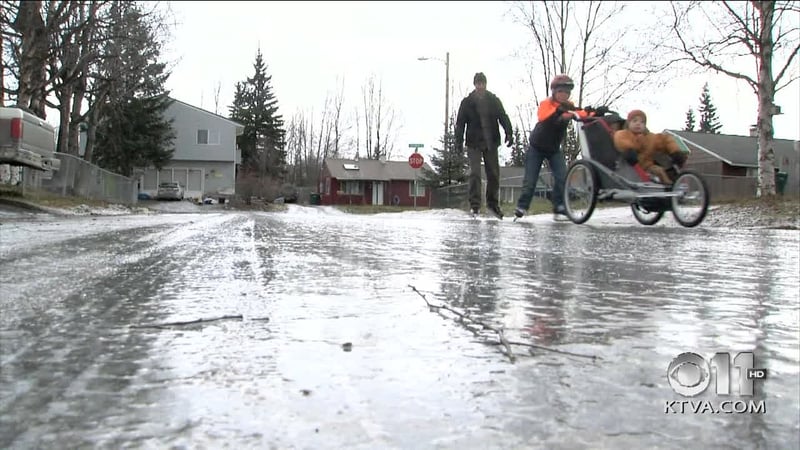 Temperatures in Anchorage soared into the 40s Saturday, turning roads into an icy mess. As of 8 p.m. Saturday, there had been 26 car crashes and 31 vehicles in distress since midnight, according to the Anchorage Police Department. On Friday, there were 42 crashes, the vast majority of which happened after 4 p.m., when rain alongside relatively warm temperatures began creating dangerous driving conditions.

Some Alaskans embraced the unusual weather. Around Anchorage, people were skating on their ice-covered streets. Climatologist Brian Brettschneider recorded one video that received several thousand shares on Facebook.

“I walked down the street and thought, ‘it would be fun to put some skates on,’” he said.

Brettschneider said warm spells like this occur once or twice each winter.

“It’s not unprecedented, but it’s pretty uncommon,” he said.

On average, high temperatures in Anchorage peak around 22 degrees in January. The melting-and-freezing that leads to slippery roads and sidewalks usually isn’t an issue this time of year.

“In the Lower 48 in the winter, it’s a big snow storm that’s going to close the schools. Here, it’s a big warm up,” said Brettschneider.

He said warm air from the tropics near Hawai’i is to blame for the change in temperature and the slick streets.

“The air melts the top layer of snow and it turns it to liquid. Then, it touches the surface below and just freezes up,” said Brettschneider, adding that it’s “very common when we have a big warm up in the winter for everything to just ice over.”

There is often speculation with unusual weather events as to whether climate change could be involved. In this case, Brettschneider says, “It’d be too much to say this event is directly attributable to climate change.”

Still, he said warm spells in the winter could likely “become more frequent” in the future.

This family decided to go for an afternoon ice skate through Nunaka Valley. How are the roads in your neighborhood?