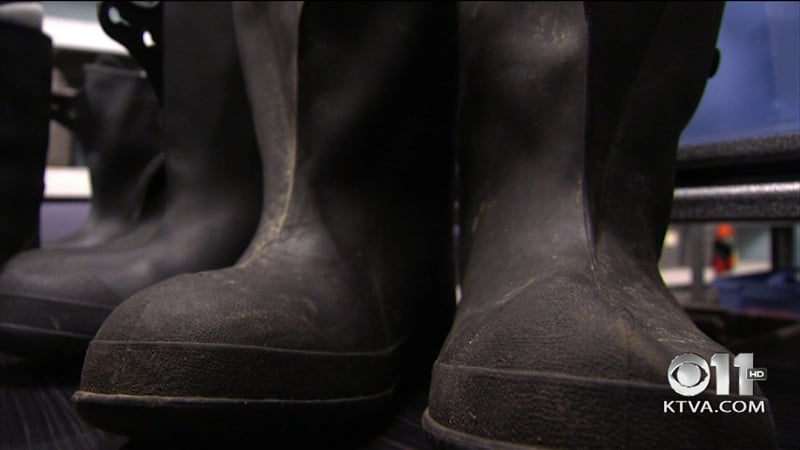 “I don’t know how they’re walking sometimes, that’s how bad it looks. Just raw,” she said.

A donation of nearly 200 pairs of boots means she can now do something about it.

Mark Barry is a doctor in Hawaii who makes custom inserts for ski boots was looking for a way to recycle the liners he would normally have thrown away. He added a rubber over boots, creating a low cost, durable and warm way for the homeless to keep their feet dry during the winter months.

“The boots will keep them very dry and they’re warm and they have a pretty good grip on the bottom so they’re not too slippery,” said Matthews.

Barry donated more than 550 pairs to an Anchorage church. Around 200 ended up at Downtown Soup Kitchen and one pair is on Sarah Pitka’s feet.

“I am very grateful for the boots because they’ve been keeping my feet really dry,” Pitka said. “Before I had the boots, my feet were always constantly wet.”

She says before becoming homeless, she took her dry feet for granted. Pitka got her boots the day before Christmas, a gift of warmth she wasn’t expecting.

“A lot of us go through hard times and right now I’m going through a really hard time and nobody [knows]. I just try not to show it,” Pitka says.

The Downtown Soup Kitchen only has a few pairs of the boots left.

Matthews says they’ve seen fewer cases of trench foot and frostbite this winter, since they started giving them away. She says feet are a person’s foundation and with a good foundation, a better life can grow.

“When you start feeling better about yourself, then you can have confidence to go to a job interview and then hopefully get jobs and then work your way out of living on the streets in the cold,” she said.