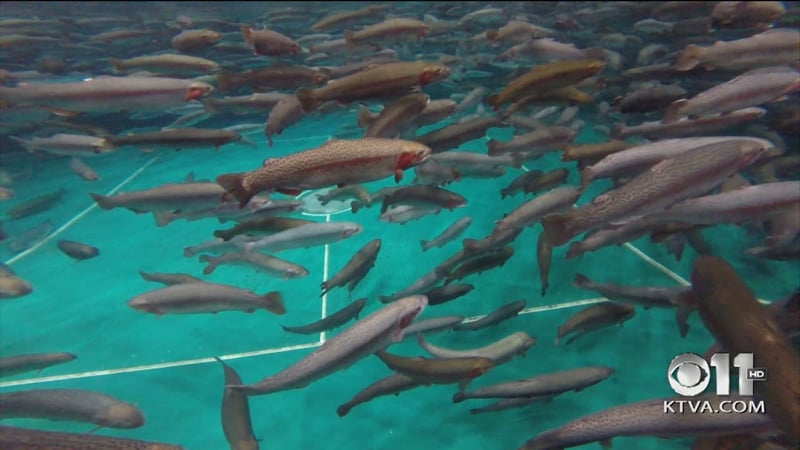 The William Jack Hernandez Hatchery is a busy place in the winter. Manager Andrea Tesch says it’s a year-round effort to keep all the lakes in Alaska well stocked.

The first day into the New Year, staff started tagging king salmon with coded wires. They’ll spend the next two months doing that to 400,000 fish. Tesch said it helps distinguish hatchery fish from the wild ones.

This spring the Alaska Department of Fish and Game will release 6.5 million fish throughout the state. It’s taking comments on its proposed stocking plans. There are two major changes this year due to state budget cuts: The hatchery won’t stock any arctic grayling and its trout harvest has been reduced by about 20 percent.

Most fish will head out by truck to lakes and rivers around southcentral Alaska, but Tesch said the department has found some interesting ways to reach remote places.

“We put our stocking trucks on the state ferry and go to Cordova and Seldovia,” she explained. “There are some lakes just outside of Seward that we have volunteer backpackers meet us at lakes that are only accessible on foot.”

Over in the trout tanks, Brood Stock Supervisor Chuck Pratt weighs the rainbows to get a more accurate count.

“This will be the last time they’re sampled before they’re spawned so I get an end weight of how big we’ve actually grown them,” he explained.

While it’s only January, the fish think it’s April; they’re three months ahead of schedule.

“We can spawn them in January and have them ready to go by June and July as two-gram fry,” Pratt said.

If they released the 650,000 fish in September there wouldn’t be enough food for all of them.

“It’s like putting teenage wrestlers in an apartment with a half stocked fridge,” Pratt analogized.

He said hatchery fish are not only important because they take the pressure off of wild stocks, but they keep anglers happy all summer too.

Comments for Fish and Game’s stocking plan are due by Jan. 29.