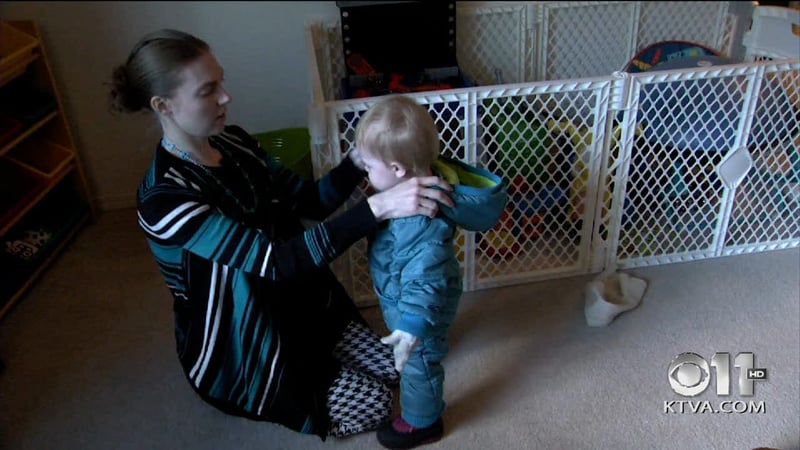 When Summer Capet had her first child a year and a half ago, she and her fiancé thought her staying home full-time with Kaius would be a temporary arrangement.

But when Capet started to look up childcare costs for her newborn, she had a change of heart.

“Between $800 and $1,200 a month is what we’re saving,” said Capet, who opted to continue being a stay-at-home mother instead of footing that bill. “It was almost pointless for us to both be working, when one of our jobs would basically just be covering the cost of child care.”

It’s a struggle she shares with other local stay-at-home parents around town — like Alicia Busick, who said child care for her four youngest children would’ve started at $2,000 a month. Busick now works from home part-time and still plays both mom and teacher to her kiddos.

“Even with one earner, a decent income, it’s tremendously expensive. All the costs just stack and stack and stack,” Busick said of local child care. “Most parents can justify one family member staying home, and so we just justified it.”

When it comes to the affordability of child care, families should be spending no more than 10 percent of their budget, according to the U.S. Department of Health and Human Services. Numbers from the Economic Policy Institute show in Anchorage, two-parent households with two children are spending about 20 percent on child care.

Statewide, new numbers from Child Care Aware of America show “a year of infant care is almost $5,000 more than a year of tuition at a public college.”

Parents are used to saving for their child’s college education, according to Thread Alaska’s CEO Stephanie Berglund. But that thought process doesn’t usually apply when it comes to child care.

Young parents — who are traditionally making less money — and single parents — who likely don’t have the option of not working — are the ones hardest hit by high childcare costs.

“An entry level salary isn’t going to cover childcare costs,” Busick said. “It’s a rock and a hard place for a lot of parents.”

Child care costs are driven by a number of factors, Berglund said, citing food expenses, learning materials and critical child development training for the care providers as examples. She said parents who do have a choice to stay home or go to work are “strongly challenged by the availability of quality care” and the cost that comes with it.

After seeing the latest numbers from Child Care Aware, Berglund said Thread Alaska will continue to focus on change.

“We’re losing a big piece of our workforce,” said Berglund of the parents who are opting out of child care to stay at home. “We know parents can’t pay any more [money].”

Capet said the cost of taking care of Kaius herself is priceless — she’s able to see all of his milestones firsthand and she gets to keep her peace of mind.

When asked if she would ever put her son in child care, Capet said it’s a possibility.

“Although I don’t see it happening until he’s pre-school age,” she said. “I would have to find a job first that was really well paying, basically.”

Until then, she’ll keep Kaius at home and keep saving for his future.