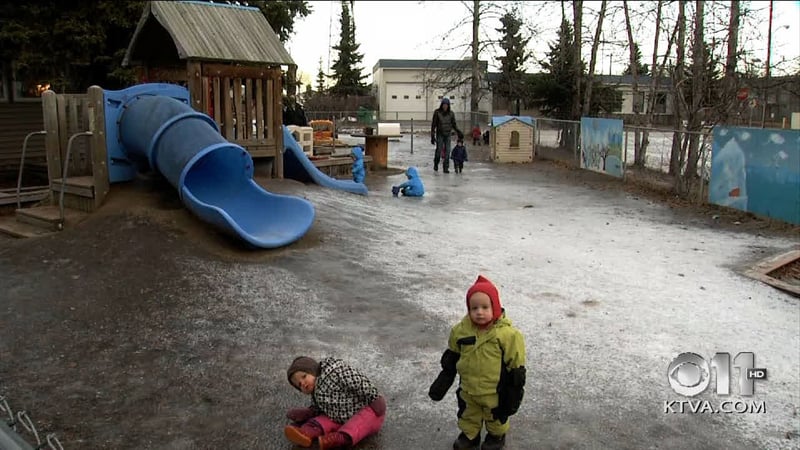 Imagination Station Daycare and Preschool doesn’t advertise, but Shauna Donnelly says she gets calls every day from parents looking for childcare options.

“Right now, we don’t have any openings at either of our facilities,” said Donnelly, who serves as director of Imagination Station. “I turned down probably five people yesterday.”

The center, which can house more than 150 children, has a two-year wait list for school-aged children and a one-year wait list for infants. Donnelly says the openings the center does have are immediately taken up by existing clientele, which doesn’t leave much room for new clients.

Hillcrest Children’s Center has also found itself in Anchorage’s childcare crunch. The center is filled up through September 2016, so if parents want to get in the door, they should plan a year in advance. When it comes to the availability of childcare in Anchorage and Alaska, there’s only half the supply available to meet the demand, according to Thread Alaska, one of the state’s childcare resources.

“It’s heartbreaking to hear parents call when they find out their baby is about to be born or they’re like, ‘OK, we’re going to be coming back to work,'” says Christina Eubanks, director of Hillcrest Children’s Center. “And then they see they really have no options.”

Part of the problem lies in the rules and regulations from the state and municipality, says Donnelly. But with more regulations come more costs, and “it’s shut down some facilities,” she says.

Imagination Station recently had to replace its playground equipment to keep up with the changed codes.

“We had just purchased playground equipment right before they made the change,” said Donnelly, who says they then went eight months without equipment to fundraise in order to help absorb the costs of a $15,000 piece of equipment for the kiddos.

Another struggle she says daycare centers around town share is training for the center’s staff. Some of the newest proposed changes from the Alaska Department of Health and Social Services call for administrators to “participate in continuing education… by obtaining three semester hours of college credit in courses relevant to childcare and development every year.”

“Don’t get me wrong — I’m all for training our staff,” said Donnelly. “But some of our employees are single moms. They don’t have time to do a college class.”

Daycare providers agree — there’s not much money to be made in the childcare industry. Eubanks calls it a labor of love — the labor often doesn’t match the wage. She says the mark of high-quality childcare equals a well-trained staff, but problems arise when being well trained isn’t reflected in providers’ income.

“When you’re not able to make a livable wage, so when you’re sitting here and you’re coming in and you’re stressed about paying your rent, paying your utilities, covering your cost to live,” said Eubanks, adding that a high turnover rate is one of the leading factors in the shortage. “And then you’re supposed to be meeting the emotional needs of the children in your care, it just makes for a really stressful situation.”

She promises Hillcrest and other centers aren’t greedy for parents’ money and they’re not getting joy from turning families away. They’re just doing their best with the state of the industry, for the sake of the children in their care.