FRANKLYWNOW - Playtime for pups: Anchorage gets an indoor dog park

Playtime for pups: Anchorage gets an indoor dog park 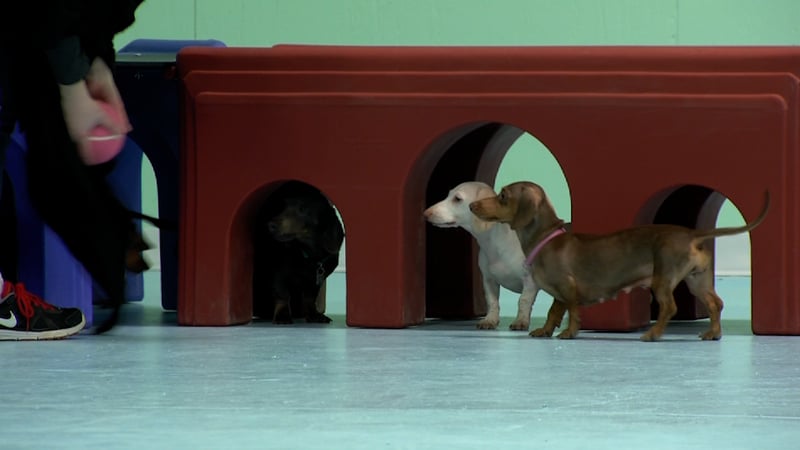 Sabrina Cantu doesn’t have to go far to take her seven mini dachshunds out for playtime.

In fact, she doesn’t even have to go outside.

The bottom floor of Cantu’s home is an indoor dog park, Fido’s Playground, which she says is Alaska’s first.

“You know you have the outdoor park, but I would have to keep her on a leash because I didn’t want her to wander off,” said Cantu, adding the idea came to her after seeing her own pups suffer in the Alaska winter conditions. “That was hard for me, because the small dogs, their fur’s so short, and their paws freeze and they get cold.”

Located on International Airport Road, Fido’s Playground has thousands of square feet dedicated to keeping the dogs active, warm and out of harm’s way.

“To know, you know, that you can throw the ball and they’re not going to keep on going across the street,” she said.

For a $12 day pass, pups of all breeds can enjoy the various stations Fido’s has to offer — a doggy treadmill, plenty of climbing equipment, an exercise wheel and more.

“It works like a gym membership,” she said. “You can get a day pass, you can get a monthly pass, we have yearly passes.”

The dogs are separated by size, with the smaller dogs “sectioned off by the gate from the bigger dogs so they don’t get so intimidated,” Cantu said.

“If they have aggression, then they can’t come,” she said, but she notes even the biggest of pups are welcome. “I’ve had Dobermans, the mastiffs, German shepherd, pittbulls, they’re just all sweet.”

She says best of all, they can make all the noise they want. Cantu’s warehouse space is virtually noise-proof to the outside.

“We can throw wild parties, and nobody’s really gonna hear us,” she laughed.

They’ll keep the party going all winter long — and they’ll be open in the summer too, Cantu says.

The post Playtime for pups: Anchorage gets an indoor dog park appeared first on KTVA 11.