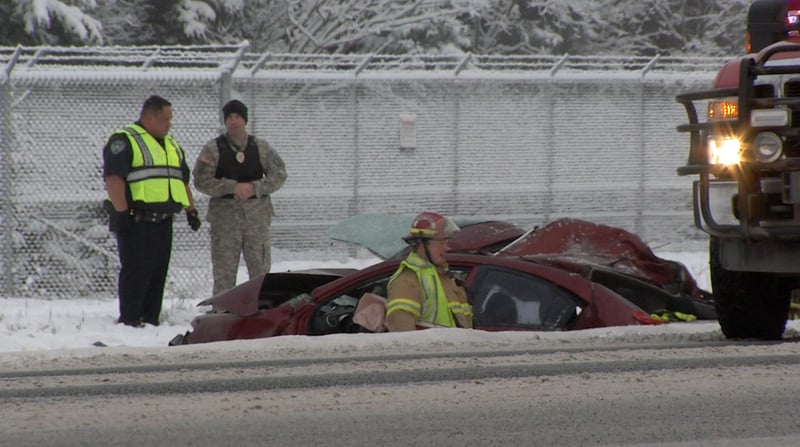 They are asking drivers to slow down as the roads are very icy — and to also move for emergency vehicles.

All northbound lanes of Boniface Parkway have been reopened between Northern Lights Boulevard and Debarr Road following an earlier crash involving a bicyclist.

Police responded to the crash at 12:47 p.m. in which a Ford Taurus attempting to turn onto Boniface Pkwy. did not slow down and was hit by a Subaru going north, according to an online release from APD.

The Subaru then hit a sport-utility vehicle in the southbound lane of Boniface Pkwy., which was then pushed into a bicyclist heading south.

“The bicyclist was not wearing a helmet and was transported to the hospital with a serious but non-life-threatening head injury,” police wrote in the release.

Updated at 1:20 p.m.: Anchorage police say all lanes of the Glenn Highway are open near the Fort Richardson exit after a multi-vehicle crash.

At 11:33 a.m., APD says a red Mazda traveling outbound on the Glenn lost control and crossed into the inbound lanes, where it was struck by a gold Ford Explorer.

Snow-covered roads caused multiple crashes around town Thursday morning, including one involving a school bus with 28 students on board.

The Anchorage Police Department was notified of the crash involving a school bus and a truck near the corner of Old Seward Road and Rabbit Creek Road just before 8 a.m. The bus was on its way to Goldenview Middle School, says Heidi Embley with the Anchorage School District.

No one was taken to the hospital, but “medics did check out a couple of the students on the bus that were complaining of neck pain,” says APD spokeswoman Jennifer Castro.

Two tow trucks worked to remove the vehicles involved in the crash.

About an hour later, APD says two vehicles were involved in a crash near the intersection of Minnesota Drive and Tudor Road. It took a little over an hour to clear the vehicles from the scene, police say.

With the exception of a few flurries, the area’s snowfall is finished, says KTVA 11 Weather. The storm total for Tuesday, Wednesday and the early morning hours of Thursday is 3.8 inches.

The post Thursday marked with multiple crashes around Anchorage appeared first on KTVA 11.