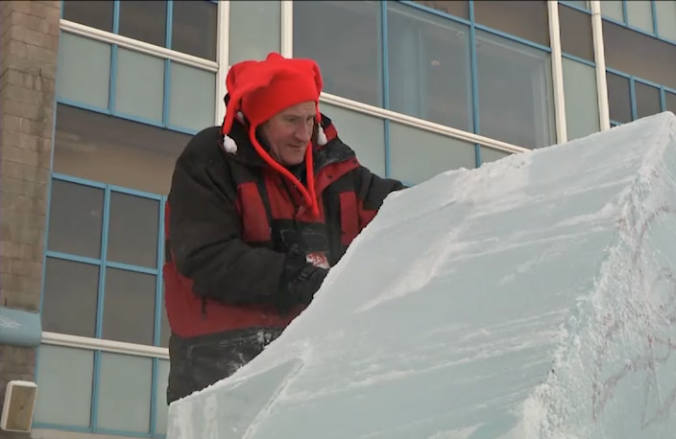 When it comes to ice carving, John Trescott has one motto: The colder the better.

With temperatures in the mid-teens Friday, it was the perfect day to start the Crystal Gallery of Ice competition in downtown Anchorage.

Trescott and his teammate, Tony Hartgrove, have been carving together for almost 20 years.

They always pick a mythological character to create in ice; this year it’s a griffin.

“The wings are feathers then the texture on the front arms is of a bird like bird feet and chicken skin. And the bottom is of a lion,” Trescott explained.

His team is one of 11 in the competition, put on by the Anchorage Downtown Partnership.

Each is tasked with transforming a 1,000 pound block of ice into a work of art in less than 3 days.

“There’s nothing better. It’s Alaska. What else are you going to do in Alaska? It’s cold, there’s not that much daylight. Why not ice carve?” Trescott quipped.

He said there’s good camaraderie between the teams but he’s hoping to edge them out, like he did last year, with his prize-winning Kirin.

“We are here to defend the championship,” he said, smiling.

The competition wraps up Sunday, January 17 around 4 p.m. The sculptures will be available for viewing in Town Square Park until the end of February or until they melt.