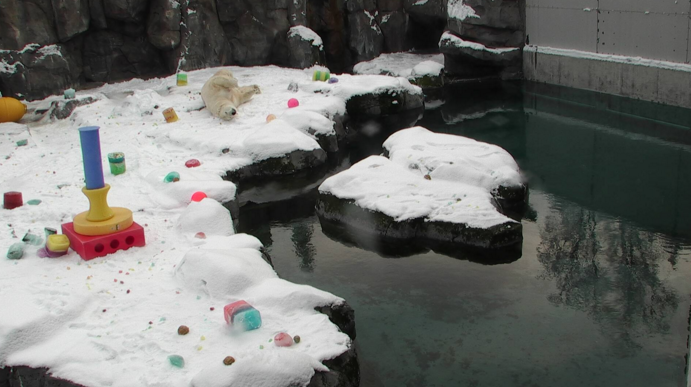 The Alaska Zoo’s resident polar bears got a special treat Saturday during their birthday celebration.

Ahpun and Lyutyik were served “ice cakes” with frozen food inside, adding a splash of color to their Arctic-centric habitat at the zoo.

Humans were invited to join in the celebration. S’mores were served outside the polar bear exhibit, according to zoo staff, and a 5K Polar Bear Run and a 1K Polar Bear Crawl were held just after 10 a.m. Zoo staff said other activities include crafts and hands-on polar bear items.

The event will last until 1 p.m. and is included with zoo admission.

Ahpun has been with the zoo since she was orphaned in 1998 and Lyutyik joined the Alaska Zoo family in 2006.

Can’t make it? The Alaska Zoo has a 24-hour live camera web feed of the polar bear exhibit.