FRANKLYWNOW - Anchorage reacts to biggest quake to hit city since ‘64

Anchorage reacts to biggest quake to hit city since ‘64 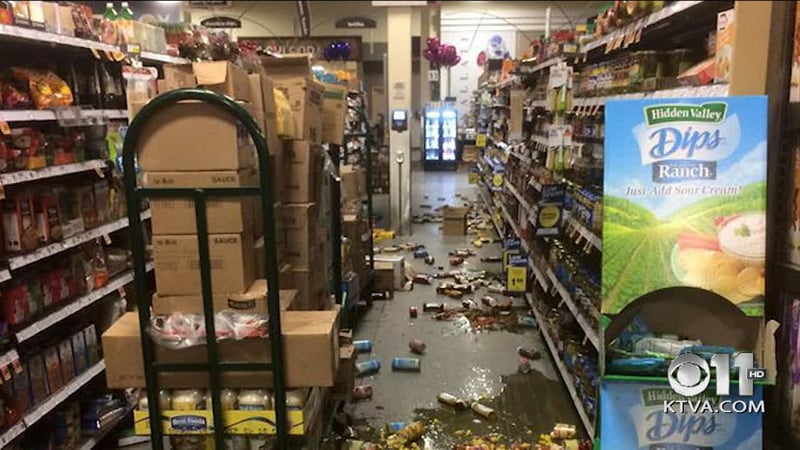 At 1:29 a.m. Sunday, most people in Anchorage were sleeping. At 1:30, nearly everyone was awake. The 7.1 magnitude earthquake lasted roughly 15 seconds and was centered about 160 miles southwest of the city. But because of the soft sediment underneath Anchorage, the shaking was felt for more than 30 seconds in some places.

“It really just sounded like ‘bang, bang, bang,’” said Anchorage resident Olivia Shrum. “I honestly believed there was a bulldozer was behind me,” she said.

Many people described the earthquake as a few initial jolts, quickly developing into more violent shaking. Shrum said she went into her bathroom, where a mirror came off the wall and fell on top of her.

“Before I even had time to move, the whole thing just shattered [and] came crashing down on me,” Shrum said.

Power outages were reported in several parts of the city, including Government Hill, Midtown and at the Fifth Avenue Mall.

In the hours following the quake, Alaskans rushed to post photos and videos on social media. Some showed grocery and liquor store aisles riddled with broken bottles and merchandise. In one dramatic video, an employee at Ted Stevens Anchorage International Airport showed lights swaying back and forth inside a cargo area. Another Anchorage resident filmed their chandelier swinging.

“This style of earthquake of this size in this area is in no way a surprise or unexpected,” said Michael West, a seismologist at the Alaska Earthquake Center at UAF.

He said the depth of the quake at about 75 miles lessened the severity of the shaking. However, it also allowed it to be more widely felt. People were woken up in Fairbanks and the shaking could be felt as far north as Barrow.

Aftershocks were recorded each minute in the moments following the quake. West said the potential for aftershocks still exists, and some could be severe.

The largest aftershock yet was a 4.3 magnitude quake recorded just after 3:30 a.m.

The post Anchorage reacts to biggest quake to hit city since ‘64 appeared first on KTVA 11.