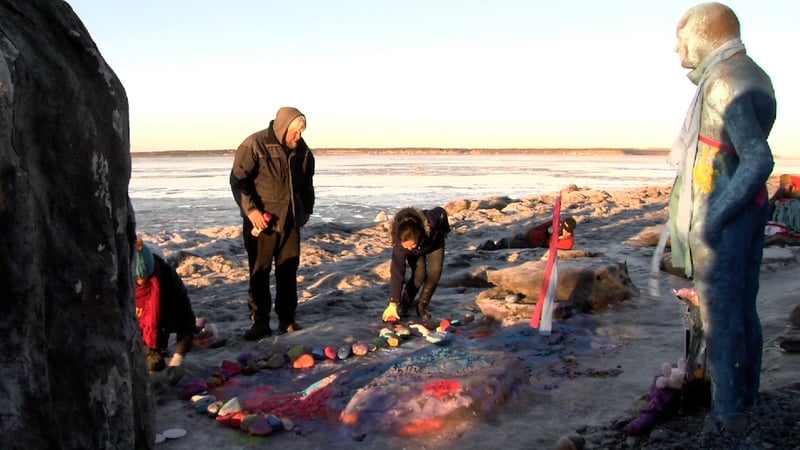 Sarah Davies and another 100Stone volunteer paint rocks for the memorial

Selena Mullenax's family console each other while others decorate the site

Point Woronzof was recently the scene of a gruesome double homicide, and Sunday, a local artist hosted an art memorial for the two victims at the site of their deaths.

A pool of frozen blood marked the spot on Point Woronzof beach where 19-year-old Selena Annette Mullenax was found dead early Thursday morning. Somewhere close by, 20-year-old Foriegnne Aubert-Morissette was found still breathing, but later died at a nearby hospital. Standing watch over the crime scene were dozens of plaster and concrete statues, which their creator said bore witness to the double homicide.

“Those statues that are down there, that are part of the exhibit, they are very much alive to a lot of us, and they were present for the very last moment of those children’s lives,” said artist Sarah Davies, who designed and headed the massive art installation 100Stone and put together the Sunday event. “I feel like I would like to offer to the families of those children perhaps a bit of comfort in knowing their children were not alone when they died.”

Davies said the goal in hosting the event was to bring healing through art to the victims’ families and friends, as well as the community and first responders.

Mullenax’s family attended the event. Her mother, Rose Mullenax, called her “a beautiful person” who “was always happy.” She said her daughter was likely in the wrong place at the wrong time.

“I am very thankful for this event, and it has brought me a sort of peace,” she said. “It’s meant a lot to me. I am just thankful to be able to decorate the site so it doesn’t look so grim, and I can go away feeling like she’s happy that we came. I think she would have loved to know that we did this for her.”

The group at the beach painted rocks and wrapped brightly colored strips of cloth around statues near where Selena Mullenax was found. Davies said she intended to find the area where Aubert-Morissette was found to do the same thing, but wasn’t sure of the exact spot.

“It’s just such an incredible tragedy,” Davies said. “It’s difficult to understand why I feel compelled to do this, it’s difficult to describe, but I need to do something. And I think I’m not alone in feeling that. I think that a lot of people… wish that there was something that they could do.”