FRANKLYWNOW - Students feed the hungry with ‘mountain of sandwiches’

Students feed the hungry with ‘mountain of sandwiches’ 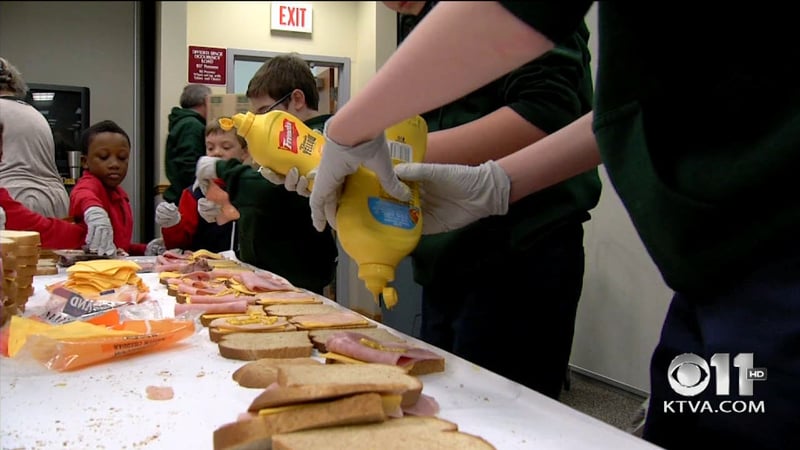 Students at Saint Elizabeth Ann Seton Catholic School got a lesson in giving back on Monday. It all started with a sandwich assembly line.

Sixth grader Liam Thomson and his classmates used four simple ingredients to solve a not-so-simple problem: meat, cheese and mustard between two slices of bread. It was a cure for hunger in the community.

The sandwiches would eventually end up in the hands of hungry Alaskans at the Brother Francis Shelter.

“We’re looking at our community and seeing all the poor people who are less fortunate than us and trying to give back, give stuff to them,” Thomson said

Parents donated the supplies for 1,500 sandwiches but it was up to the students to put them together. Principal Kathy Gustafson said it was a hands-on lesson in generosity.

“That’s very important for kids in this day and age to understand that it’s not all about themselves,” Gustafson said. “There’s other people who need help out there and we want to teach and train them, ‘how can we reach out to those people?'”

It didn’t take Thomson and the other students at St. Elizabeth’s very long to finish a “mountain of sandwiches.” They loaded them up in boxes and the fourth grade class delivered the sandwiches to the shelter.

“It feels really good that our small school could do that much,” Thomson said.

Monday’s event was part of the kick-off of Catholic Schools Week, a nationwide event. St. Elizabeth’s students also do other community service projects during the year.

The post Students feed the hungry with ‘mountain of sandwiches’ appeared first on KTVA 11.