What’s On the Menu?: Alaska entrepreneur delivers good eats straight to your door 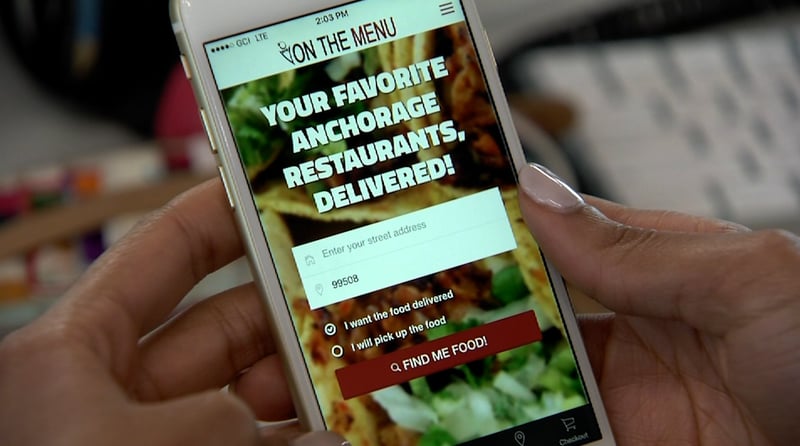 On any given afternoon, Skyler Lovelace’s compact car is overrun with the smell of food, hot out the oven.

“That’s the hardest part of this whole job — is not eating the food that we’re delivering,” said Lovelace. “Especially when it’s Fat Ptarmigan.”

Lovelace’s start-up, On the Menu, is a food delivery service, similar to the Seamless or GrubHub apps which have gained popularity in the Lower 48.

“Theres a whole ‘nother model that I could look at down in the states to bring it up here and model it after,” noted Lovelace. “So my goal is to be first in the market here.”

The Alaska entrepreneur is banking on the little known fact that hunger drives humans. Except in this case, Lovelace does the driving.

“I mean how many times have you been home and it’s freezing rain or there’s a foot of snow on the ground?” he asked. “Or you just only have an hour lunch break or half-hour lunch break, and you’re tired of the food that’s in your area?”

On the Menu is in the early stages of development, with nine delivery drivers on staff and only four eateries for users to choose from currently: Don Jose’s Mexican Restaurant, Capri Coffeehouse & Cafe, Fat Ptarmigan and Red Robin (to rollout in the near future). When it comes to partnering with local restaurants, Lovelace uses his Homer roots to his advantage.

“They like to see that we’re not a franchise, we’re not another company coming in from out of state,” said Lovelace of the restaurants. “We’re local, born and raised.”

As his meal delivery service continues to catch on in Anchorage, Lovelace has his sights set on expansion beyond the Bowl. He says local eateries in Eagle River, Wasilla, the Kenai Peninsula and Fairbanks are all on his radar, adding that the best part of the service is “bringing delivery to restaurants that normally don’t deliver.”

Plus, Lovelace says, On the Menu’s users are paying for convenience more than anything else.

The post What’s On the Menu?: Alaska entrepreneur delivers good eats straight to your door appeared first on KTVA 11.