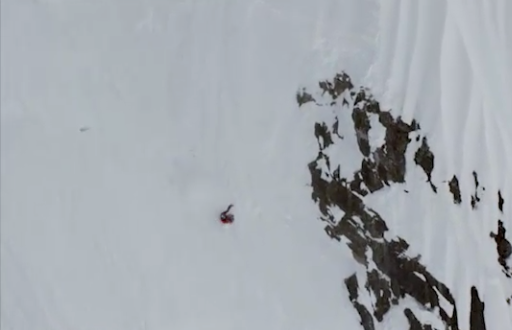 A skier’s massive fall down an Alaska mountain is all caught on tape.

Freestyle skier Angel Collinson was skiing in the Neacola mountains near Lake Clark last spring when she hit a patch of icy snow and couldn’t recover.

The 26-year-old careened out of control, 1,000 feet down the slope for 27 seconds. Collinson said in a Skype interview with KTVA that she’d never had a fall like that before. She tried to stay relaxed and stop herself, but couldn’t because she was going too fast.

“When I realized I wasn’t going to be able to stop, I covered my head and my face with my arms and that’s when you see me rag-dolling because I didn’t want to hit any icy chunks with my face,” she said.

Collinson was wearing a camera that captured the fall from her point of view. She was shooting a film with Teton Gravity Research and their helicopter crew also got the entire fall on camera.

She said she wasn’t feeling well that day but decided to do the run anyway.

“Knowing when to back down is a big skill and normally I’m pretty good, but this really fine-tuned in, to listen to my gut instinct,” she said.

Collinson said she was fortunate her only injuries were a couple of jammed fingers, along with some bumps and bruises.

“I had the best, most successful season of my life because of that trip. It was really important for me to get back out there, shake off the fear and dust it off and keep going.”