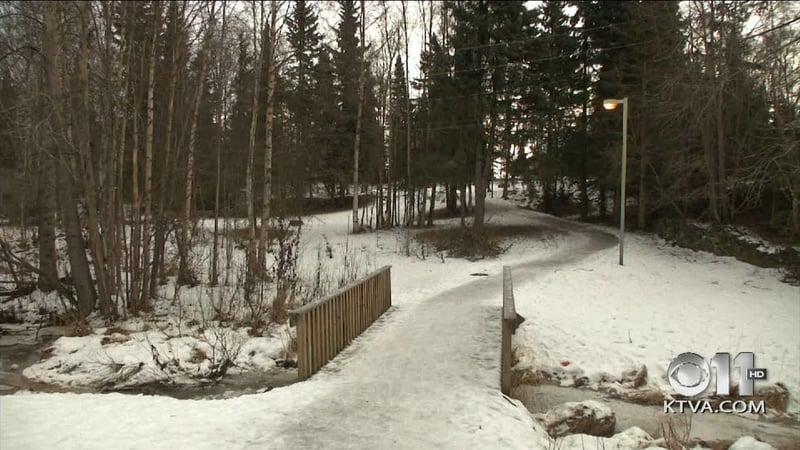 Turnagain neighbors like Rita Scruton know the Fish Creek Trail could use some work.

“It’s just mostly really rough. Even on your bike you have to watch. It’s a lot of roots and broken pavement,” said Scruton, while she was out for a walk with her dog, Sadie.

The trail is about a mile long it total, but it snakes in and out of neighborhoods near parks and playgrounds. It was put in more than 30 years ago and has had very little maintenance since. It’s not just the pavement that needs improvement.

“We have this light pole leaning here that has to be replaced,” Nichole Rehm pointed out.

Rehm is the project manager who also works for Professional Technical Services, the company the municipality hired to oversee the Fish Creek Trail Rehabilitation Project. She’s working with CRW Engineering to design a $2 million plan to fix the path and the four bridges. The money for the project is federally funded because it’s part of a safety improvement project.

Not only are the bridges old and falling apart, they’re also too close to the creek.

“This summer when we had that large, record rainfall I think the water was all the way up to the beams, so I think this bridge would need to be raised up out of the water zone,” Rehm said.

The trail rehabilitation is part of a larger effort to make Anchorage more bike-friendly. The goal is to ultimately connect the Fish Creek Trail from Tudor Road to the Coastal Trail.

“The more of these small connections through the neighborhoods, the easier it is to get between neighborhoods, non-motorized,” said Brian Looney, the design project manager with CRW Engineering. “I think it’s going to encourage people to do that form of travel more often.”

Rehm said the upgrades will make the trail safer and hopefully encourage more people to get out and explore.

Construction will likely begin in spring 2017.

The Fish Creek Trail Rehabilitation Project is one of about 30 projects the public will have a chance to look at the 2016 Transportation Fair on Thursday, Feb. 4, from 4 p.m. to 8 p.m. at the Alaska Airlines Center at the University of Alaska Anchorage.