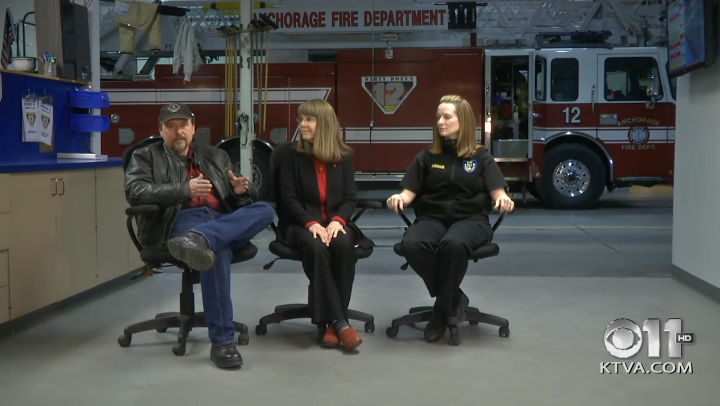 It’s a call she remembers well: May 4, 2014 — A call from a man whose wife had gone into cardiac arrest at their home in Eagle River.

For Robinson, it was the first call after the Fire Department switched to a hands-only CPR technique.

On the 911 recording you can hear her give Herte scripted instructions on how to perform the procedure.

“With straight arms push down as hard as you can like you’re pumping her chest.”

Herte sounds worried in the recording. “I think I just broke her rib,” he said.

She stayed on the line for 12 minutes with Herte as he performed compressions on his wife Jodi, who is still alive today because of his efforts.

“My husband is asking me if I remember what happened,” Jodi recalled, waking up in the hospital with no memory of what happened. “He tells me he saved my life. I was just flabbergasted.”

Nearly two years later Jodi has made a full recovery. We met with the Hertes at Anchorage Fire Station 12, where Robinson still works as a dispatcher.

Herte says her step-by-step instructions helped him until the paramedics arrived.

“I was pretty focused. Frances kept me focused on the task at hand. I figured I’d take care of this and there will be plenty of time to be scared afterward.”

Jodi Herte said Robinson’s presence on the other line gave her husband the stamina he needed to keep up with the compressions.

“Thanks to Frances for walking Keith through it, and people like her,” Jodi said as she hugged Robinson. “It means the world to us.”

Jodi was diagnosed with cardiomyopathy — a type of heart disease — eight years before her cardiac arrest.

Today she leads an active, healthy lifestyle so she can make the most of her second chance.

“I’ve got two great-grand children and there’s times I look at them and I think I could have missed all this. I could have been gone,” she said.

February is National Heart Month, a time to raise awareness about heart disease and stroke.

In cases of out-of-hospital sudden cardiac arrest, like Jodi’s, only 10 percent of people survive.

Keith and Jodi are the only patients Robinson has met in her nine years as a dispatcher. She said it’s a reminder CPR really can be the difference between life and death.

“They’re amazing people, and now I feel like I have a friendship with them,” said Robinson

The post Anchorage 911 dispatcher helps man save his wife’s life with CPR appeared first on KTVA 11.