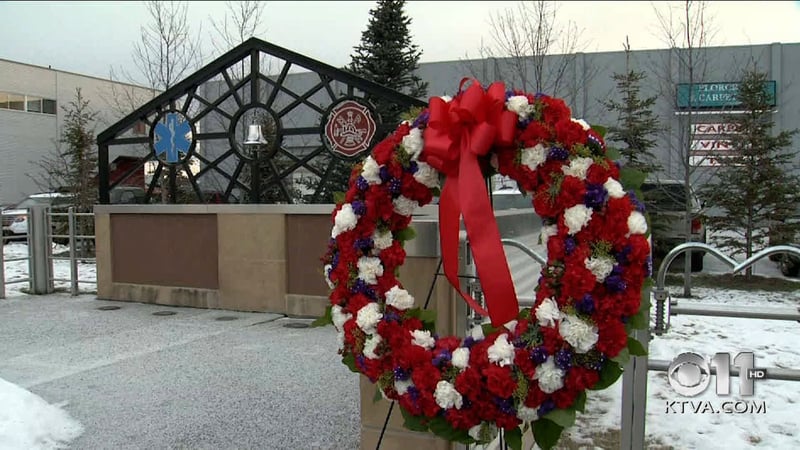 ANCHORAGE — On Feb. 6, 1976, a fire broke out at the Bi-Lo Supermarket on Muldoon Road just after midnight.

Anchorage Fire Department Engine 6 was the first unit to arrive at the scene and included 23-year-old firefighter Charles “Chuck” Whitethorn, according to AFD. The fire was upgraded and other fire teams from AFD and Joint Base Elmendorf-Richardson responded.

At some point during the fire, Whitethorn was operating a hose line through the front door of the store when a “violent flashover” occurred. An object struck Whitethorn in the chest, killing him.

On Saturday, 40 years later, officials gathered at the Alaska Fallen Firefighter Memorial in downtown Anchorage to honor Whitethorn’s sacrifice in the line of duty. Current Fire Chief Denis Leblanc and former fire Chief Craig Goodrich were present for the ceremony, which included laying a wreath at the memorial site.

“He is an example of the quiet valor of dedicated men and women who spend long days waiting for that call which may require them to give their utmost, even their lives,” fire officials said of him in a statement.

Goodrich noted that even after four decades, the death of a co-worker can stay with someone, forcing them to relive it.

“For that individual, they’ve gone wherever they’re going to go,” he said. “It’s the people that are left behind that are going to have to carry the burden, and so we want to make sure that the rest of the people who are doing well can lighten that burden as much as possible.”

No one else was injured during the fire that claimed Whitethorn’s life. He is one of 27 Alaska firefighters honored at the memorial.