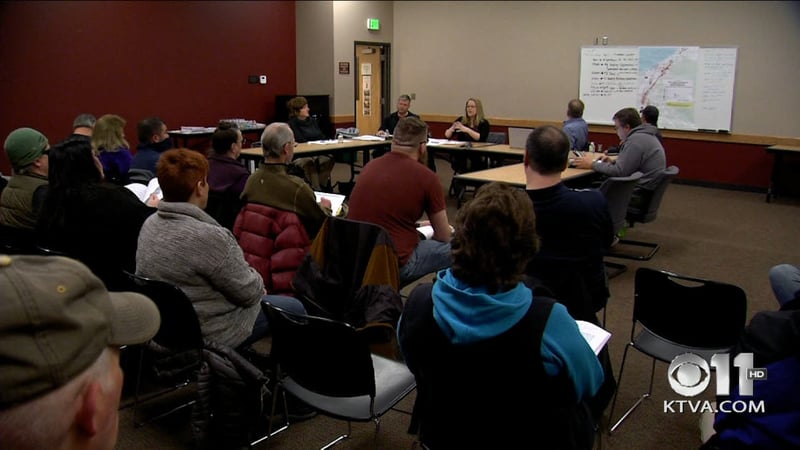 ANCHORAGE — On Tuesday, the Anchorage Assembly will be voting on ordinances outlining the zoning and licensing codes marijuana businesses will have to follow. Given the complexity of the issue, Assembly member Amy Demboski hosted a town hall in Eagle River on Saturday to discuss the topic with her constituents.

In 2014, most voters in the area voted against Alaska Measure 2, which legalized the sale and recreational use of marijuana.

“This was a tough room today,” said Chris Euscher, who hopes to get involved in the marijuana industry.

Several others planning to open pot businesses in Anchorage, even if not in Eagle River itself, joined her.

“I didn’t hear a whole lot of people discussing that they were open minded about a lot of this,” Euscher said after the meeting, adding she believes there is significant misinformation about Anchorage’s laws surrounding marijuana sales. “A lot of people that I heard in here today have not read the regulations. They’re scared, and I totally understand that.”

Eagle River resident Bernie McClure said that while she hasn’t lived in Anchorage proper, this part of the municipality is more family-oriented.

“The main concern is what the impact will be to the impressionable youths,” said McClure, who, like many others at the meeting, is hoping marijuana businesses will be forbidden from opening within 1,000 feet of a school or church, instead of the proposed 500 feet.

“The message I received from the Chugiak-Eagle River community today was very loud and clear: 1,000 feet,” Demboski said.

She said she hopes Eagle River will be able to require unique criteria for opening a pot business if the regular Anchorage laws aren’t restrictive enough.

“We’re part of Anchorage, but we are unique,” Demboski noted. “We are Chugiak-Eagle River, and we’re going to make sure we do things well that fits our community out here.”

She said she is expecting both the zoning and licensing ordinances to pass at Tuesday’s Assembly meeting. People can start applying for licenses to sell marijuana in late February. Demboski said the earliest shops will open is late summer or early fall of this year.