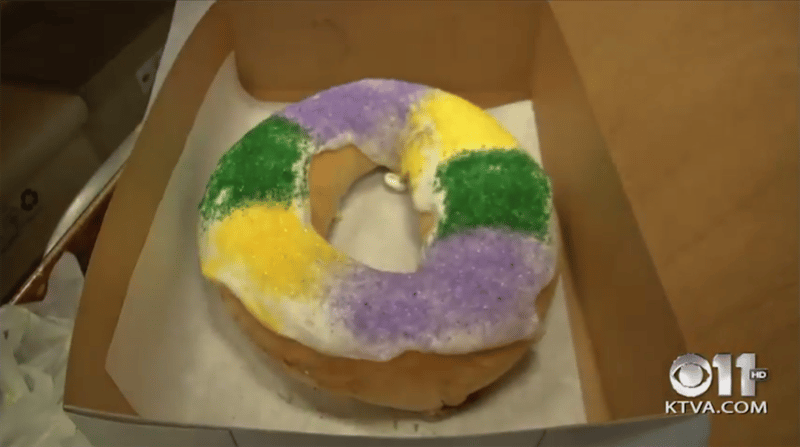 ANCHORAGE — On “Fat Tuesday,” House of Bread bakers were sending king cakes out the door as fast as they could make them.

“We’ve made about 100 but we have another batch coming up and we keep getting people coming in and we’re running out,” said manager Carson Baldiviez around 10:30 that morning. “It’s good problem.”

The traditional treat is a sweet dough filled with cinnamon and sugar. It’s shaped into a wreath, frosted and dusted with sprinkles.

“Purple for justice, green for faith, gold for power,” owner Ginna Baldiviez explained. “You have to be quick with the sugar or it’s going to harden up on you and it’s not going to stick.”

Each batch took about three hours to make. The bakery estimated they sold more than 150 king cakes.

There’s usually a toy baby hidden inside the cake and whoever finds it will have good luck. This year, they’re serving the baby on the side because some Alaskans don’t understand the Creole custom.

“Last year I did have a gal come into the bakery. She had the baby in her hand and informed me she found this in her bread and she wasn’t too happy about it,” she laughed.

Baldiviez said she thought House of Bread was the only bakery in Anchorage making king cake. Customers were glad they could still find their Mardi Gras must-have sweet.

“I’ve visited New Orleans and I got to experience the culture so it’s fun to bring a little piece of that back and to have a little New Orleans kind of fun here in town,” said Tiffany Winsor, who was picking up two cakes for an office party.

House of Bread said making king cakes is a fun and colorful way to bring a little bit of Louisiana to the Last Frontier.