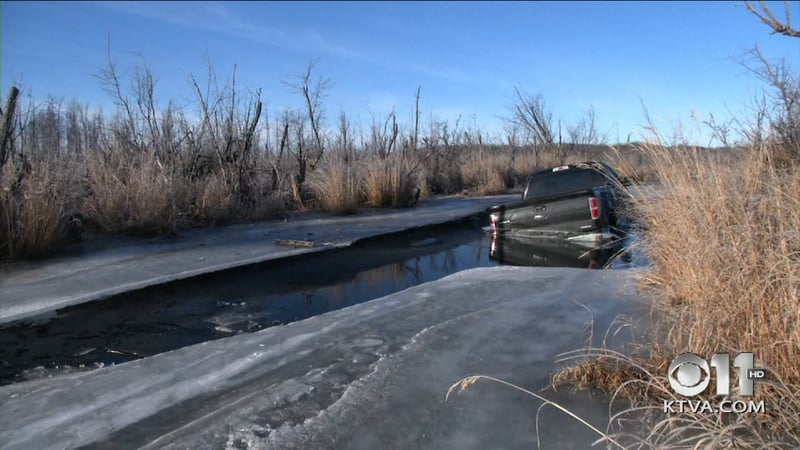 It was an impressive sight as a massive snow cat made its way across the ice at the Palmer Hay Flats. The tow truck rolled through a half mile of refuge into the woods to get to a Ford truck lodged in Wasilla Creek.

“A lot of energy and effort for a one-night little ride, you know. An expensive night out,” said refuge manager Doug Hill.

The truck is the second vehicle to go through the ice near Rabbit Slough this winter. Before the crew from Happy Hooker could get towing, they had to do some trimming, cutting down dozens of dead trees to accommodate the 10-foot tracks.

“We have to make sure our machine stays safe and doesn’t get any trees in the tracks. If it destroys the tracks we won’t be able to get it back out,” Eric Behm explained.

Hill said an incident like this could have a major impact on the environment. Not only did the towing company have to take out the trees, the truck could damage salmon rearing grounds in the creek.

“All things considered, we’d prefer not to have gas and oil,” Hill said. “If that radiator blows open because it froze we’d have a bunch of antifreeze in the creek.”

Off-roading in the refuge is only legal for snow machines and four-wheelers if there’s a foot of snow on the ground and they have a permit.

“You can have open water out here any time of year but typically not to this extent. This feels like April to me,” he said as he watched the crew work.

It took nine people nearly three hours to get the truck out.

“With those big tires it wouldn’t come over that lip. Once we got that lip freed it came right up that ice,” Behm said.

With all that work the driver is looking at a $2,000 towing bill. Off-roading on the refuge without a permit is a Class A misdemeanor and carries a fine of up to $10,000 and a year in jail. Alaska State Troopers haven’t cited the driver yet.