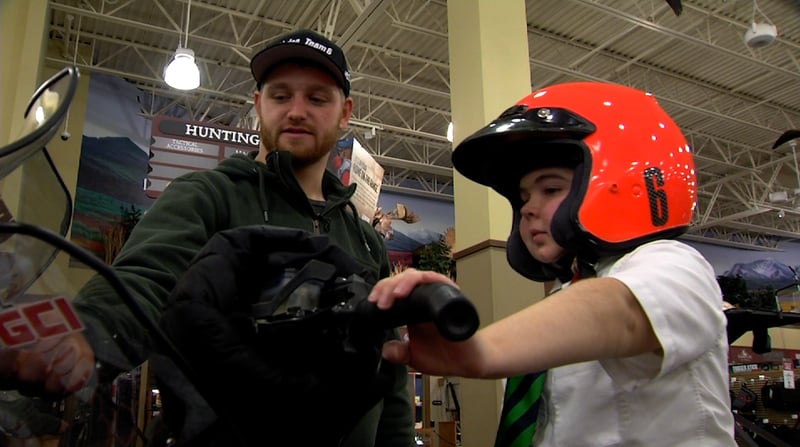 On the surface, Brad George and Sam Allred don’t seem to have much in common.

George is an Iron Dog Race veteran, whose been snowmachining for as long as he can remember. The other has seen Internet fame and has spent some time on the big screen.

Ask George what they have in common and he answers, “We’re just two kids who both got in some wrecks.”

Over the summer, Sam was seriously injured in an ATV crash. The 16-year-old suffered numerous broken bones and fractured his spine and skull, resulting in several surgeries.

The slow and sometimes painful road to recovery has given Sam time to think — he wasn’t wearing a helmet or any safety gear nor was he riding an appropriate-sized ATV. It’s a decision that’s sparked him into action to promote helmet safety and injury prevention, most recently at the Iron Dog Safety Expo — where he met George.

The Iron Dog racer also swears by the proper safety equipment. He was also in a serious wreck when he was a teenager.

“It is so hard I snapped my wrists,” George said of the snowmachine crash.

Pins and plates now line the right side of George’s body. Luckily, his safety vest displaced the impact, so it wasn’t as severe. But George says doctors would have assumed the worst if he wasn’t properly geared up.

“Probably wouldn’t have turned out the way it did,” he admits. “It could’ve been fatal.”

George says whether it’s a ride in the backyard on the ATV or a trek through Alaska, he now swears by the safety gear that saved his life.

He and Sam spent some time at the expo going through George’s safety gear for the big race. Sam even put George’s helmet on and hopped on his snowmachine.

The teen doesn’t know how soon it will be before he’s riding again, but he says from here on out, he’ll make sure to guard his body with the right gear.