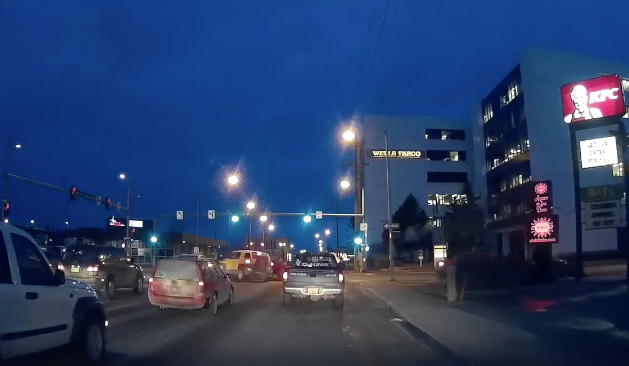 It seems to be an all too common sight here in Anchorage — a vehicle speeds through a traffic light, moments after the light turns red. If you walk, drive or ride a bike, it’s likely you’ve seen it take place more than once.

Friday morning just before 8 a.m., Anchorage resident Rusty Musick was on his way to work when this exact scenario played out in front of him.

“We were just driving westbound on Northern Lights, like we do every morning, heading to work,” Musick recounted in a phone conversation. “I kinda saw the car looking like it wasn’t gonna stop, but I was like, ‘Ah, they’re just coming a little fast.'”

Cue the dashcam video. In it, you see a red Toyota Camry speed through a red light at the intersection of Northern Lights and C St., smashing into at least two other vehicles.

Three vehicles were involved in the crash, and none of the drivers sustained life-threatening injuries, wrote Jennifer Castro, spokesperson with the Anchorage Police Department, in an email Friday:

Just before 7:45 a.m. a female driver in a red Toyota Camry was traveling southbound on C Street and ran a red light. Video evidence shows that the light had been red for at least 3 seconds prior to the Camry entering the intersection.

Two vehicles were traveling westbound on Northern Lights and had entered the intersection on a green light, when they were struck by the Toyota Camry.

The female driver of the Toyota Camry was transported to a local hospital with non-life threatening injuries. No other major injuries were reported in the collision.

The female driver was cited for running a red light.

It was a similar scenario three years ago, said Musick, that prompted him to purchase a dashcam in the first place.

“You catch everything,” he said.

Castro could not immediately provide statistics on how many red light crashes occur every year in Anchorage, but Musick, who’s lived here since 1998, said the problem of people running red lights seems to be worse in Alaska’s largest city than elsewhere.

“You see the two or three people that go through an orange that turns red — that’s typical everywhere. But the light’s been red for a second or more, and someone still blows it? It’s not unheard of elsewhere, but I think it happens a lot more here than other places,” said Musick.

After the crash, Musick contacted APD and offered up the dashcam video footage as evidence.