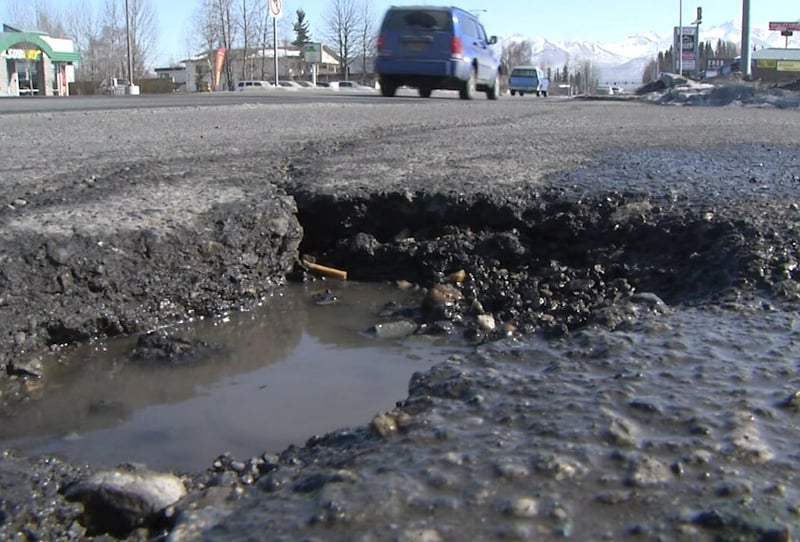 Anchorage’s warm weather is taking a toll on local roads in the form of an early pothole season. And many Anchorage drivers are paying the price.

Chris Cowell with Johnson’s Tire Service says the business is seeing at least a dozen customers a day who come in for tire repairs due to potholes. He has to tell them many times their tires can’t be repaired, only replaced.

“For instance, this morning I’ve seen three tires where the sidewalls have bubbled out,” said Cowell. “When something like that happens the tire can’t be repaired. Any sidewall damage to the tire, I can’t put a patch or plug in it or anything like that,thus we have to replace the it.”

Cowell said what frustrates customers even more is that sometimes all four tires have to be replaced, even if only one is damaged. That can happen with four wheel drive vehicles that are required to have the same tires so as not to damage the drive train or impede all wheel navigation.

For their part, city and state crews say they are working on getting the roads fixed. But Mother Nature isn’t helping. Department of Transportation spokeswoman Shannon McCarthy said winter rains have left moisture under the roadbeds and freezing and thawing have damaged them.

“Typically when we have one pothole we have twenty,” said McCarthy. “They all open up at once so that’s whats hard to keep up with.”

McCarthy advised drivers to slow down and try to keep some distance between themselves and the vehicles in front of them so that they might be able to see potholes and avoid them.

If drivers can’t avoid them and do end up with damage? McCarthy said it’s likely they’ll have to foot the bill, neither the state or the city typically reimburse for damage caused by potholes.